The 2022 Winter Olympics are finally here, live on NBC and Peacock! See below for the answers to all of your frequently asked questions surrounding the Beijing Winter Games. If you’ve missed any of the action, we’ve got you covered with the best moments from the 2022 Winter Olympics. WATCH […]

The 2022 Winter Olympics are set to take place on Friday, February 4 through Sunday, February 20, just six months after the Tokyo Games. However, the competition begins with curling on Wednesday, February 2, two days before the Opening Ceremony.

The 2022 Winter Olympics will be held in China across three zones: Beijing, Yanqing, and Zhangjiakou. The ice sports will be held in central Beijing, China’s capital, as well as four snow events (snowboard big air and freestyle skiing big air, men’s and women’s). The Opening and Closing Ceremonies will also take place in Beijing. Yanqing, a mountainous suburb of China’s capital located approximately 75 km (46.6 miles) northwest of Beijing’s city center, will host Alpine skiing and sliding events (bobsleigh, skeleton, and luge) and will also be the home of the Olympic Athletes’ village. Zhangjiakou, located approximately 180 kilometers northwest of Beijing (111.8 miles) will host the majority of the ski and snowboarding events including freestyle, cross-country, ski jumping, Nordic combined, and biathlon.

What sports are in the 2022 Winter Olympics?

There will be a total of 109 medal events across the following 15 sports:

What is the expected medal count for the U.S.?

The U.S. finished fourth on the medal table in PyeongChang with a total of 23 medals (9 gold, 8 silver, 6 bronze) and is expected to fare a similar result in Beijing. Shaun White (Carlsbad, California), Mikaela Shiffrin (Edwards, Colorado), and Nathan Chen (Salt Lake City, Utah) are just a few of Team USA’s biggest stars that are expected to compete in Beijing. White, a three-time Olympic gold medalist, could become the first U.S. man to win the same individual event at three Olympic Winter Games. Shiffrin, a two-time Olympic gold medalist, could potentially compete in five events in 2022 due to the schedule–the six-time world champion previously competed in five total events at the 2014 and 2018 Olympic Winter Games combined. Chen, the three-time reigning world champion in men’s singles, remains the favorite for gold in Beijing.

Will NHL players be allowed to compete in Beijing?

NHL players were originally set to return to the lineup in Beijing after missing the 2018 PyeongChang Olympics–their first Olympic absence since 1994–but the league made the decision to withdraw in late December 2021 due to a surge in COVID-19 cases that impacted the NHL’s schedule. Many NHL players were frustrated over the decision as letting players make individual choices to leave their NHL teams for the Olympics was never presented as an option.

RELATED: 2022 Winter Olympics – A guide to Men’s Hockey at the Beijing Winter Games

Will fans be allowed to attend the 2022 Winter Olympics?

What is the time difference between the U.S. and China for the Beijing Winter Olympics?

How can I watch the 2022 Winter Olympics?

Peacock will be the streaming home of the Beijing Winter Games offering live stream coverage of every single event–that’s over 2,800 hours of Olympic action. Viewers can also tune to NBC, USA, and CNBC to watch the Games. Streaming will also be available via NBCOlympics.com and the NBC Sports app.

How to watch the Closing Ceremony on NBC and Peacock

The Closing Ceremony of the 2022 Winter Olympics takes place on Sunday, February 20 live at 7:00 a.m. ET on Peacock and NBCOlympics.com and again in primetime at 8:00 p.m. ET on NBC and Peacock.

Who are the mascots of the Beijing Winter Games?

Bing Dwen Dwen: Bing Dwen Dwen, the Olympic mascot, is a panda. In Mandarin, the word “Bing” has several meanings, including ice, and also symbolizes purity and strength. “Dwen Dwen” means robust and lively and also represents children. The mascot wears a full-body shell made out of ice and is said to embody the strength and spirit of Olympic athletes.

Shuey Rhon Rhon: Shuey Rhon Rhon, the Paralympic mascot, is a Chinese lantern child with a glowing heart who symbolizes warmth, friendship, courage, and perseverance of Paralympic athletes. The Chinese lantern is a cultural symbol representing celebration, harvest, and prosperity. Red is considered the most festive color (and is fitting since the Games will overlap with Chinese New Year celebrations).

RELATED: Winter Olympics 2022 Schedule – What to watch at the Beijing Winter Games on NBC and Peacock

Read more about the 2022 Winter Olympics

Tue Mar 15 , 2022
Last month, Tom Brady shocked the sports world by retiring from the NFL. 40 days later, the sports world was much less surprised to learn Brady had effectively never really left. Why the quick flip-flop? According to Brady’s father – it’s the media’s fault. We’re living in an era of […] 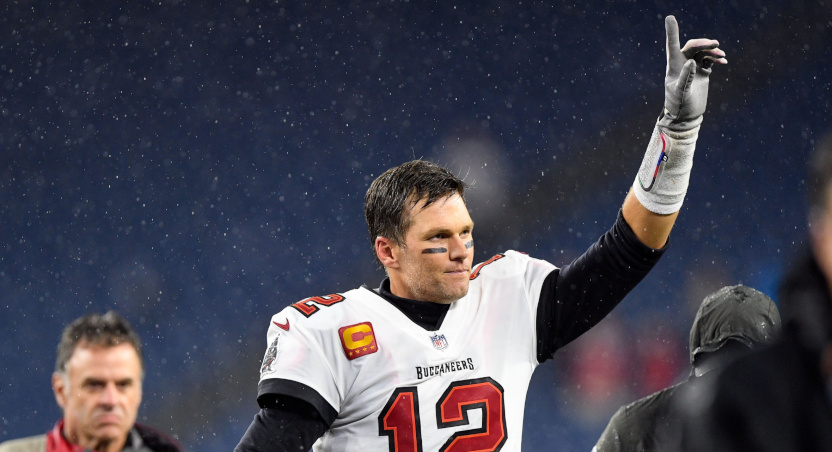