The Milwaukee Brewers rose to the top of an admittedly weak NL Central in 2021, and had baseball’s fourth-best record after June 18. Alas and alack, Milwaukee’s postseason run lasted only four games. They were ousted by the eventual World Series champion Atlanta Braves, 3-1, in the NLDS. Freddie Freeman […]

The Milwaukee Brewers rose to the top of an admittedly weak NL Central in 2021, and had baseball’s fourth-best record after June 18. Alas and alack, Milwaukee’s postseason run lasted only four games. They were ousted by the eventual World Series champion Atlanta Braves, 3-1, in the NLDS. Freddie Freeman iced the Brewers’ season with a series-winning home run off Josh Hader.

“This year the disappointment is a little bit higher, frankly, for all of us than we’ve had previously, even with some of our tougher exits,” Brewers president of baseball operations David Stearns told MLB.com’s Adam McCalvy after the season. “And that’s not a bad thing. It means we had really high expectations here this year. It means that we thought we had a really good team; we did have a really good team. We had a team that performed at a very high level and for a long time. And when all of those things happen and the season ends, it hurts.”

The Brewers denied the Mets permission to interview Stearns, a New York native, for their president of baseball operations job shortly after the season. After that, Stearns and his staff tweaked more than overhauled the roster, and Milwaukee’s projected $129.3 million payroll will be the largest in franchise history by about $8 million. The window to win a championship is as open as it’s going to get. Let’s preview the 2022 Brewers.

Urías is dealing with a quad injury and is expected to miss Opening Day. That injury pushes Peterson into the starting lineup and likely gives a bench spot to Keston Hiura, who has seen time in the outfield this spring. Swapping Jackie Bradley Jr. (and two prospects) for Renfroe was a smart move that saved money and also upgraded the offense without sacrificing defense. Milwaukee had a .396 slugging percentage as a team in 2021, seventh lowest in baseball. The hope is full seasons of Adames and Tellez, and the additions of McCutchen and Renfroe, will boost an offense that didn’t put up much of a fight in the NLDS.

The Brewers used a six-man rotation most of last season — the currently unsigned Brett Anderson was the “sixth” starter and Lauer was often shuttled back and forth to Triple-A to make roster space — and they could do it again this season, with prospects Aaron Ashby, Alec Bettinger, Dylan File, and Ethan Small all candidates to make starts. Clearly though, Milwaukee’s strength is the top of the rotation, which includes the reigning NL Cy Young winner in Burnes and two other All-Stars in Woodruff and Fastball Freddy. It is arguably the best 1-2-3 punch in baseball, and Houser and Lauer are no slouches backing them up.

Hader’s days as a multi-inning fireman are over and he’s now a strict one-inning closer, and quite good at it too. Williams broke his hand punching a wall in September and missed a postseason, though if it’s any consolation, the Brewers weren’t one reliever away from beating the Braves in the NLDS. Ashby was electric at times out of the bullpen last season and is a prime candidate to work longer stints in relief before transitioning into the rotation. The Brewers have a knack for unearthing quality relievers (Cousins had a 2.70 ERA last year after pitching in independent leagues in 2019 and 2020) and manager Craig Counsell as a master at using his relievers in the right spots. The pitching staff top to bottom is Milwaukee’s undisputed strength.

Now for three questions about the 2022 Brewers.

“It’s not easy as it looked, the first two years,” Yelich told Todd Rosiak of the Milwaukee Journal Sentinel after reporting to spring training. “Even when you’re playing really well, you’re still working really hard. It’s not automatic. You just don’t wake up. There’s a lot that goes into that stuff. It’s a long grind. It’s a long battle. That’s a baseball season. For players, for teams, so much happens over six, seven months. You go through good stretches as a player, as a team, and you go through bad stretches. You just have to ride them out.”

Yelich, who turned 30 in December, still produced strong exit velocities in 2021, though not quite as strong as 2018-19, and his ground ball rate jumped to 54.4 percent. It was 47.8 percent from 2018-19. Ground balls will sap slugging percentage real quick. Yelich is still among the better contact hitters in baseball, it’s just that he’s producing less desirable contact. Fewer well-struck fly balls and line drives combined with more weakly hit grounders explains the performance decline.

What explains the change in batted-ball profile? That is unclear, and even the Brewers admit even they don’t know the answer. Yelich fouled a pitch into his leg and broke his kneecap in Sept. 2019, and he’s had on and off back trouble in recent years. Injuries could certainly have contributed to his decline. Expecting Yelich to get back to his 2018-19 form is unrealistic. Those were very likely his absolute peak seasons. But surely he can be better than league average, right?

The Brewers still owe Yelich $188.5 million through 2028. That contract could cripple a small-market team like Milwaukee should 2020-21 Yelich prove to be his new normal. For the Brewers to have their best chance at winning a World Series, they need Yelich to be an above-average contributor, and to build contending rosters in the future, they need his contract not to be a complete albatross. This is a massively important season for Yelich and the Brewers.

2. Who will be this year’s breakout pitcher?

In 2019, Woodruff broke out as an impact starting pitcher. In 2020, it was Burnes who made the jump. In 2021, it was Peralta’s turn. So who will be Milwaukee’s breakout starting pitcher in 2022? Lauer is a good pick. As Luke Hooper detailed at FanGraphs last September, the Brewers tweaked Lauer’s mechanics and pitch selection, and the result was a 3.19 ERA in 118 2/3 innings. I can see Lauer doing that (or even better) across a full season as he gets more comfortable.

For my breakout Brewers pitcher pick, I’ll go with Ashby, the team’s No. 1 prospect. Here’s what our R.J. Anderson wrote about the left-hander in January (Aaron is the nephew of longtime big leaguer Andy Ashby, by the way):

We highlighted Ashby last fall as a rookie who could put himself on the map with a strong postseason. He didn’t; instead, he gave up five hits and two runs in 2 2/3 innings of relief. Oh well. Ashby figures to get a chance to start again next season, and he would seem to have a decent shot at making it work. He has a legitimate out pitch, in his slider, as well as a mid-to-upper-90s sinker and two other secondary pitches to keep batters honest. Ashby has already proved he can miss bats and turn over a lineup once; it’s not out of the question that he becomes a mid-rotation type, and soon. The worst-case scenario has him returning to the bullpen as a multi-inning buzzsaw.

The Brewers have an impossible to ignore track record of pitcher development. Look at the adjustments Lauer made last season. Heck, look where Burnes was in 2019. He allowed 52 runs and 17 homers in 49 innings! Now he’s a Cy Young winner. It might not happen overnight, but when Milwaukee gets its hands on a talented arm, good things tend to happen.

Ashby, 23, got his feet wet last season, struck out 39 in 31 2/3 innings, and is poised to take on a larger role this year. His fastball is more conducive to grounders than strikeouts, but the breaking ball misses a lot of bats, and he has the pitching smarts you’d expect from someone with big-league bloodlines. Ashby has a lot going for him heading into 2022.

I might be breakout pick-ing Ashby a year too early. It’s possible he’ll spend 2022 working as a multi-inning reliever/spot starter a la Peralta from 2019-20. If he does and his breakout doesn’t arrive until 2023, so be it. Point is, the Brewers have another young impact pitcher set to arrive for good this season, and Ashby is as good a breakout pick as anyone on the staff, if not anyone in the league.

3. Is this the last year with Stearns?

Since hiring Stearns away from the Astros in Sept. 2015, the Brewers have gone from a club that regularly finished third or fourth in the NL Central to a team that has made the postseason four straight years. They’re still trying to get over the hump and win the first championship in franchise history, but the recent success is undeniable. Stearns has turned Milwaukee into a perennial contender.

That success has made Stearns a wanted man. The Mets badly want to give Stearns the reins to their baseball operations, though Brewers owner Mark Attanasio has declined to give them permission to interview his top baseball executive the last two offseasons. I’m certain other clubs have inquired about Stearns in recent years. It never hurts to ask, right?

This could — could — be the last year on Stearns’ contract. His contract includes a unique clause tied to the team’s on-field success:

If Milwaukee wins the National League pennant in 2022, Stearns will become a free agent after the season. If Milwaukee does not advance to the World Series, Stearns will remain under contract to the Brewers through the 2023 season.

Should the Brewers win the pennant, Stearns will hit the open market, and Cohen can throw bags of money at him and not have to worry about permission to interview. The Brewers don’t want to lose Stearns, but they also want a championship, and I’m guessing Attanasio will “give up” Stearns to get that championship. There are lots of smart executives out there, but only one team is happy at the end of the season. Flags fly forever.

This much is clear: Attanasio and the Brewers have to begin thinking about their post-Stearns plan. He’ll become a free agent this offseason or next, and unless Attanasio opens the wallet to win a bidding war (Attanasio is wealthy, but not Cohen wealthy), he’s going to need someone else to run his baseball operations in the near future. Having a succession plan in place wouldn’t be a bad idea, even with the club focused on winning a title.

Sun Mar 27 , 2022
Olympic bronze medalist Shoma Uno concluded a dominant performance at the figure skating world championships by winning the gold medal Saturday, while Vincent Zhou of the U.S. used a strong free skate to catapult from sixth after his short program to earn the bronze medal. Uno finished with 312.48 points […] 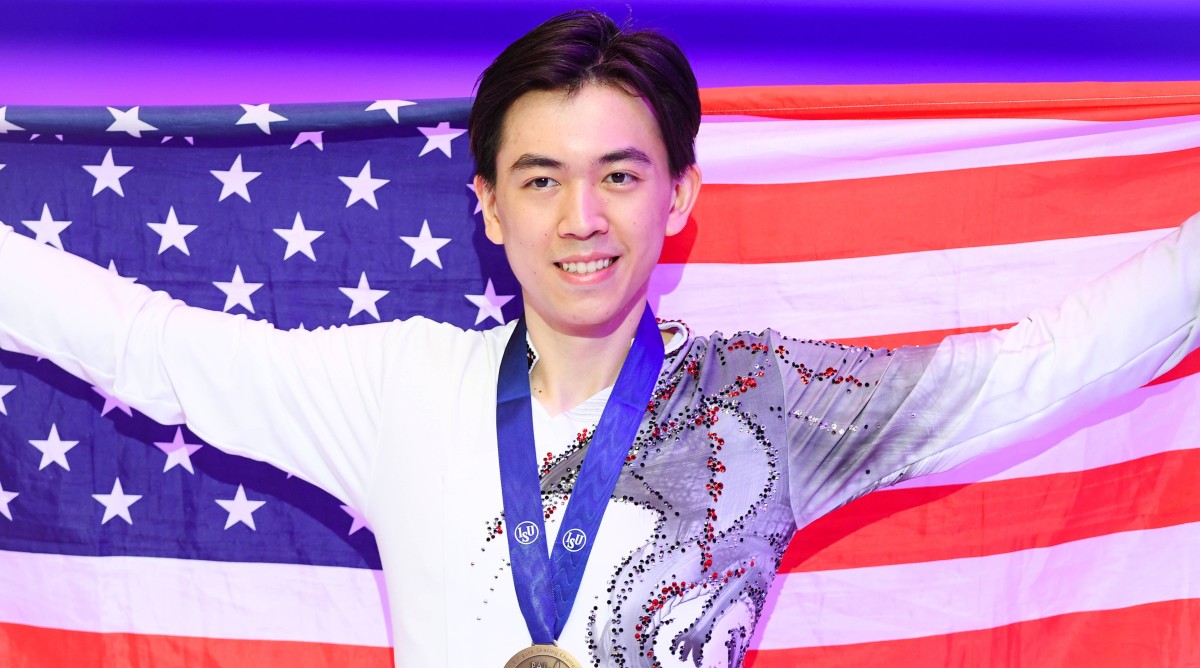