The sale of the Premier League soccer team Chelsea, triggered when the British government sanctioned its Russian owner for his ties to the Kremlin, had already been the most peculiar team sale in recent sports history. On Friday, it suddenly became the most confusing, after one of Britain’s richest men […]

The sale of the Premier League soccer team Chelsea, triggered when the British government sanctioned its Russian owner for his ties to the Kremlin, had already been the most peculiar team sale in recent sports history. On Friday, it suddenly became the most confusing, after one of Britain’s richest men entered the fray with a bold bid that upended a process that had appeared to be nearing its end.

The offer put forward by Jim Ratcliffe, the billionaire chief executive of the chemicals giant Ineos, was worth $5.3 billion, and would represent the highest price ever paid for a sports team. Its arrival disrupted a sales process that had been weeks in the making; cast doubt on the prospect of a speedy, and clean, transfer of ownership; and inserted new drama into the future of one of the world’s richest and most successful soccer clubs.

By day’s end, in fact, it was not clear if Ratcliffe’s bid would succeed, or if it was even welcome.

According to multiple published reports on Friday citing anonymous sources, a different bid led by a part-owner of the Los Angeles Dodgers, Todd Boehly, had been granted exclusive rights to negotiate its purchase of the team. The New York Times was unable to confirm that status, even as at least one other ownership group confirmed that it had been told it was out of the running.

Ratcliffe, meanwhile, had suddenly emerged from the shadows. He framed his 11th-hour offer as a “British bid, for a British club” — a clear effort to differentiate him from three rival U.S. suitors in the eyes of the British government, which must give its blessing to any sale because of the sanctions.

The timing of Ratcliffe’s proposal and the highly public nature of how it was announced — through a public statement released weeks after a deadline for offers — may hint at difficulties in gaining traction with the Raine Group, the New York-based advisory firm that is handling the sale on behalf of Chelsea’s Russian owner, Roman Abramovich.

Ratcliffe’s late intervention also raises the possibility of an ugly denouement to a process that has from its outset been shrouded in confusion and chaos, all of its playing out against the fallout of Russia’s invasion of Ukraine, and Abramovich’s ties to Russia’s president, Vladimir V. Putin.

Chelsea, the reigning European champion, was sent into a tailspin even before the British government deemed Abramovich a close contact of Putin and imposed crippling restrictions on his fortune as part of a wider set of sanctions announced against a group of Russian oligarchs. Abramovich, who has lavished more than $2 billion on Chelsea since buying the team in 2003, announced in March that he would sell the team amid scrutiny of his connections with Russia. A sale became inevitable once Abramovich’s assets were frozen by Britain’s government.

Ratcliffe’s offer includes a commitment to deposit more than $3 billion into a charitable foundation that Abramovich said he would form to accept the proceeds of the sale. (Abramovich is prohibited, under the sanctions currently in place, from receiving any money from the sale.). But Ratcliffe also committed to spend more than $2 billion on ensuring the team retains its place among global soccer’s elite.

“We are making this investment as fans of the beautiful game — not as a means to turn a profit,” Ratcliffe said in a statement issued by Ineos. “We do that with our core businesses. The club is rooted in its community and its fans. And it is our intention to invest in Chelsea F.C. for that reason.”

Under Abramovich, Chelsea has become one of the biggest and most successful teams in global soccer. That has come at a huge cost, though, with the team losing about $1 million a week since Abramovich, then an unknown Russian businessman, took control of the club in 2003.

Ratcliffe, whose wealth might surpass even Abramovich’s fortune, has suggested he would be willing to do the same. But it remained unclear Friday if his offer would even get a hearing, or if a different bid might first win the approval of Abramovich, the British government and the Premier League.

The government will need to issue a license, similar to one that has allowed Chelsea to keep operating despite the freeze order placed on Abramovich’s other assets and companies, as a condition of any sale. The Premier League also must approve all new owners.

As part of his offer, Ratcliffe said he would pay 2.5 billion pounds, or $3.1 billion, to a charitable trust “to support the victims of the war.” That language was similar to that used by Abramovich when he announced he was putting Chelsea up for sale, but it is unclear how such a charity would work, or how British officials would ensure that none of the proceeds flowed to Abramovich or entities he controls.

Ratcliffe also pledged to invest a further $2.1 billion on Chelsea over the next 10 years, a figure that would also include the redevelopment of the club’s aging Stamford Bridge stadium, another of Abramovich’s stipulations for any new owner.

Chelsea would not be the first foray into sports investment, or even soccer, for Ratcliffe, a self-described fan of Chelsea’s Premier League rival Manchester United since his school days. He already owns the French professional soccer club OGC Nice, located close to his home in Monaco, and F.C. Lausanne-Sport, a team in Switzerland. But purchasing Chelsea would be of a different magnitude altogether for a man who is known for keeping a low profile.

“We believe that London should have a club that reflects the stature of the city,” Ratcliffe said. “One that is held in the same regard as Real Madrid, Barcelona or Bayern Munich. We intend Chelsea to be that club.”

His bold and apparently unsolicited offer will surely have angered the group of American-backed bidders who have spent weeks engaged in an increasingly complicated auction devised by Raine’s co-founder Joe Ravitch. Deadlines for final bids were extended on several occasions, and then late this week the three investment groups remaining in the process were told to increase their offers by a further $600 million.

The circumstances of the sale already had been among the strangest seen in professional sports, a beauty pageant that brought together some of the wealthiest people in the world, but also celebrity athletes and unknown figures who appeared intent on using the sale to raise their own profiles.

Boehly’s bid, which sought to secure its own British connections by associating itself with a slew of well-connected Britons, including George Osborne, a former British treasury secretary, has been assiduously working to secure Chelsea since Abramovich announced he would part with the club. Boehly and his partners navigated the tricky terrain — avoiding the mistakes that proved costly to other suitors — to emerge as the front-runner this week.

Boehly’s group had been challenged by a sprawling consortium bankrolled by Josh Harris and David Blitzer, members of the ownership group that controls the Philadelphia 76ers of the N.B.A., who recently added the Formula 1 driver Lewis Hamilton and the tennis star Serena Williams to their ranks.

The third finalist was a group led by Steve Pagliuca, co-owner of the N.B.A.’s Boston Celtics. Pagliuca’s consortium included Larry Tenenbaum, the chairman of Maple Leaf Sports & Entertainment, which owns the N.B.A.’s Toronto Raptors, hockey’s Toronto Maple Leafs and Major League Soccer’s Toronto F.C. But it confirmed on Friday that it had been told its bid was no longer under consideration.

For Chelsea’s players, staff and fans, a sale cannot come soon enough. The club has been working under highly unusual financial constraints since the sanctions against Abramovich were announced. The special government license that allows the team to operate has left the club holding as many as 10,000 unsold tickets for its home games, and has forced the team to limit its travel budgets and close the team’s online and brick-and-mortar stores.

“It would be ideal” to have the situation resolved as soon as possible, Chelsea Manager Thomas Tuchel admitted after a victory on Sunday. “But you cannot pull grass so it grows faster.”

Fri Apr 29 , 2022
SINGAPORE – The International Olympic Committee (IOC) is exploring the possibility of hosting the first Olympic Virtual Sports Festival in 2023.  This was revealed by IOC president Thomas Bach during a flying visit to Singapore on Thursday (April 28). In remarks during a lunch with the Singapore sports fraternity at the Skai […] 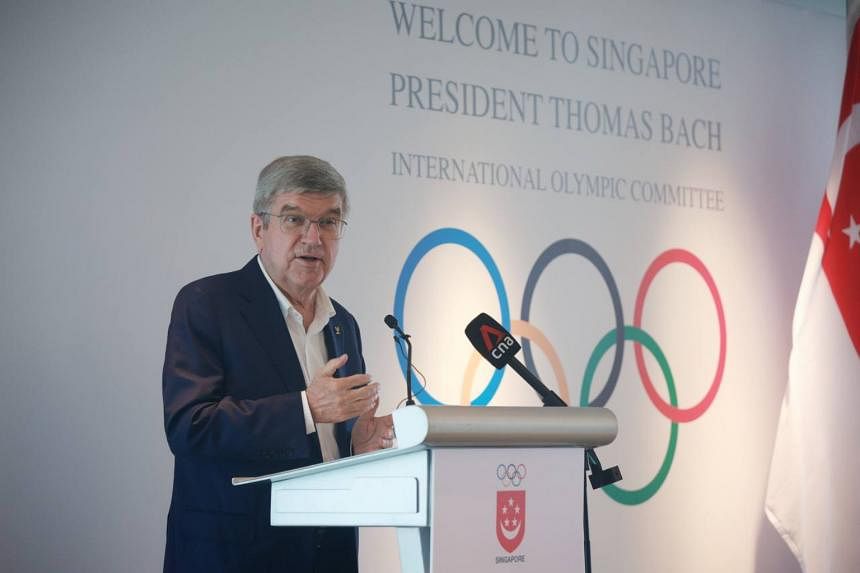