STATE OF THE OLYMPIC MOVEMENT

The Olympic Summit analysed in detail the impact of the consequences of the Russian invasion of Ukraine. The vast majority of the participants agreed that the sanctions against the Russian and Belarusian states and governments, as those responsible for this blatant breach of the Olympic Truce and the Olympic Charter, must remain firmly in place. These sanctions include:

There followed an intense debate about the participation of athletes from Russia and Belarus in international competitions. The Olympic Movement had to take the protective measures of not inviting athletes from these NOCs because, on the one hand, some governments were deciding and still decide which athletes can participate in international competitions, and which athletes cannot. The Summit strongly rejected these measures by governments as unacceptable interference in the autonomy of sports organisations and their political neutrality. The Summit emphasised that participation in sports competitions must be based exclusively on the sporting merits of an athlete and respect for the rules of sport. Another reason for the protective measures was that, in some countries, the safety and security of athletes from Russia and Belarus could not be guaranteed anymore.

These protective measures put the Olympic Movement in a grave dilemma. All athletes had to be protected from political interference. The integrity of sports competitions had to be ensured. This led the IOC to act against its mission to unify the entire world in peaceful competition, since it had to prohibit athletes from participation because of their passport only.

The participants of the Summit discussed in detail whether the reasons for these protective measures still exist and explored different ways as to how to overcome this extremely grave dilemma. This debate was informed by:

In the course of the debate, the Acting President of the Olympic Council of Asia (OCA) stated that, on the Asian continent, the reasons for the protective measures no longer exist. The OCA offered to facilitate the participation of athletes from Russia and Belarus in competitions in Asia under its authority, while respecting the sanctions in place.

Representatives from the IFs welcomed this initiative, stating that, for some IFs and for hosts of their competitions, the same reasoning would apply, and that therefore there should not be a one-size-fits-all solution, but that each IF should carefully evaluate for its sport whether the reasons for the protective measures still exist.

The Chair of the IOC Athletes’ Commission (AC) said that the IOC AC represents athletes from all 206 NOCs and the IOC Refugee Olympic Team, which was reflected in the Commission’s discussions. In this context, the IOC AC welcomes the exploration of the initiative as a way to live up to the Olympic mission to unite athletes from all around the world in peaceful competition, while noting that there are different views among the athlete community.

The President of the World Anti-Doping Agency (WADA) informed the summit that 31,112 tests had been conducted in- and out-of-competition on Russian athletes between 1 January 2021 to date. These tests have been coordinated by different entities under their respective authority, and all samples have been and continue to be analysed in WADA-accredited laboratories outside Russia.

The IOC President thanked all the participants for the open, frank and constructive debate. In particular, he thanked the OCA for its creative initiative and proposed the following conclusions to be issued by the Olympic Summit:

Participants were informed about the success of the Olympic Winter Games Beijing 2022. The vision expressed from the time of the candidature has fully materialised when it comes to the development of winter sport in China. More than 350 million Chinese citizens have now participated in winter sports activities, and the trend continues upwards.

The sustainability and legacy agenda, which has remained an absolute priority for the organisers, has fully materialised, with many benefits for the host communities.

During the Games, new heights were achieved on the media front, with a record of 2.01 billion viewers on the linear and digital platforms of the Media Rights-Holders (MRHs) and 3.2 billion engagements with Olympic social media handles during the Games.

Finally, the Summit expressed its utmost appreciation for the outstanding efforts of the Organising Committee and the Chinese Olympic Committee in seamless cooperation with the IOC and the Olympic Movement. These Games offered the most outstanding conditions for the athletes in an absolutely safe and secure environment.

The Chair of the Paris 2024 Coordination Commission informed the Summit that Paris 2024 has concluded 2022 with the successful launch of the mascots and very strong interest from the public in the sign-up process for the tickets draw, a reminder that these Games will be inclusive, exciting and innovative.

The Summit was also informed that, as a result of the efforts of all parties concerned, the Organising Committee budget remains balanced, while at the same time fully preserving the initial ambitions of the project. This is reassuring in the current context of inflation and the challenging overall economic background.

The Summit was also informed that the Commission is looking into challenges and opportunities facing future Olympic Winter Games, such as the impact of climate change. A number of proposals which could have an impact on future elections were discussed, including rotation of the Games within a certain pool of hosts, minimum climate conditions and existing infrastructure criteria.

Upon the request of the Commission, the IOC Executive Board decided to give the Commission more time to study all these factors to make the best possible decisions about future hosting, including a revised 2030 election timeframe.

Consideration was also given to the notion of a double award for 2030/2034 to create stability for winter sports and the Olympic Winter Games. Considering the opportunities and challenges this could present, no conclusion was reached, as this requires further exploration.

These considerations by the IOC Executive Board and the Future Host Commission for the Olympic Winter Games were welcomed and supported by the Summit.

Following the final Tokyo 2020 Coordination Commission report, a Games Optimisation Group was created in the summer. It will be looking into optimisation opportunities across the Olympic Games and Youth Olympic Games. The involvement of future Organising Committees and Olympic Movement stakeholders is key to this effort, and all of them are represented in the membership of the Games Optimisation Group, chaired by Kirsty Coventry. Although the objective is to look into opportunities for future Olympic Games, the implementation of optimisation measures will also benefit current organisers.

The Summit welcomed the fact that the IOC is looking into optimising the Olympic Games for the benefit of athletes and all stakeholders.

The Summit received the current planning for the inaugural Olympic Esports Week, taking place in Singapore between 22 and 25 June 2023 and representing the next major step in supporting the development of virtual sports within the Olympic Movement.

In partnership with the Ministry of Culture, Community and Youth, Sport Singapore and the Singapore National Olympic Committee (SNOC), Olympic Esports Week will showcase the best of virtual sports – across show matches, exhibitions and a free-to-play zone – creating opportunities to highlight how technology and innovations in electronic forms of sport can give the possibility to reach new audiences, promote sporting activity and entertain people around the world.

Olympic Esports Week was considered by the Olympic Summit as an important engagement platform for the IOC and the International Federations involved, in order to connect with a new audience.

Preparations for the Olympic Qualifier Series continue, in particular with discussions with cities interested in hosting the events. The final selection of hosts and announcement of the schedule is due in early 2023, with the events planned to take place in 2024 ahead of the Olympic Games Paris 2024.

The Summit noted the enormous benefit this increased promotion and engagement gave to the events, the IFs and the athletes themselves, highlighting that the #RoadtoParis2024 is well underway.

The Summit welcomed the World Anti-Doping Agency (WADA)’s update on the progress with implementing its governance reforms and the organisation’s continued focus on athletes. The Summit also took note of the update on RUSADA and was informed that, during the past two years, Russian athletes continued to be tested by different entities and all collected samples were and continue to be analysed outside Russia.

The Summit was also pleased to hear that, after the turmoil of COVID-19, out-of-competition testing was now at a level significantly higher than in 2019 – prior to the pandemic.  The Summit welcomed the WADA President’s pledge for more innovative research and focus on capacity building, including education targeting not only athletes but their entourages. On this point, the Olympic Summit underlined in particular the importance of working to ensure that the entourage can be held to the same level of accountability as athletes.

The Summit was informed that the anti-doping programme for the Olympic Winter Games Beijing 2022 carried out by the International Testing Agency (ITA) had been fully and successfully implemented, despite the challenging COVID-19 circumstances. The comprehensive pre-Games testing programme and the long-term storage of samples, building on the experience of Tokyo 2020, were also welcomed.

The Summit recognised the important work of the ITA in strengthening the Olympic Movement’s fight against doping, and called for all IFs, Continental Associations and other major sports event organisers to increase their cooperation with the ITA.

Morinari WATANABE, President of the FIG

Luc TARDIF, President of the IIHF

Jae-Youl KIM, President of the ISU

Johan ELIASCH, President of the FIS

Andrew PARSONS, President of the IPC

Spyros CAPRALOS, President of the EOC

Pierre-Olivier BECKERS, Chair of the IOC Coordination Commission for Paris 2024

Octavian MORARIU, Chair of the Future Host Commission for the Olympic Winter Games

David LAPPARTIENT, President of the UCI and Chair of the Esports and Gaming Liaison Group

The International Olympic Committee is a not-for-profit, civil, non-governmental, international organisation made up of volunteers which is committed to building a better world through sport. It redistributes more than 90 per cent of its income to the wider sporting movement, which means that every day the equivalent of USD 4.2 million goes to help athletes and sports organisations at all levels around the world.

Wed Jan 4 , 2023
Groups, gamers and coaches from around soccer flooded social media with help for Buffalo Expenditures security Damar Hamlin. The 24-12 months-aged collapsed on the discipline following a initially-quarter deal with for the duration of the Bills’ “Monday Evening Football” recreation against the Bengals in Cincinnati. Hamlin was administered CPR on […] 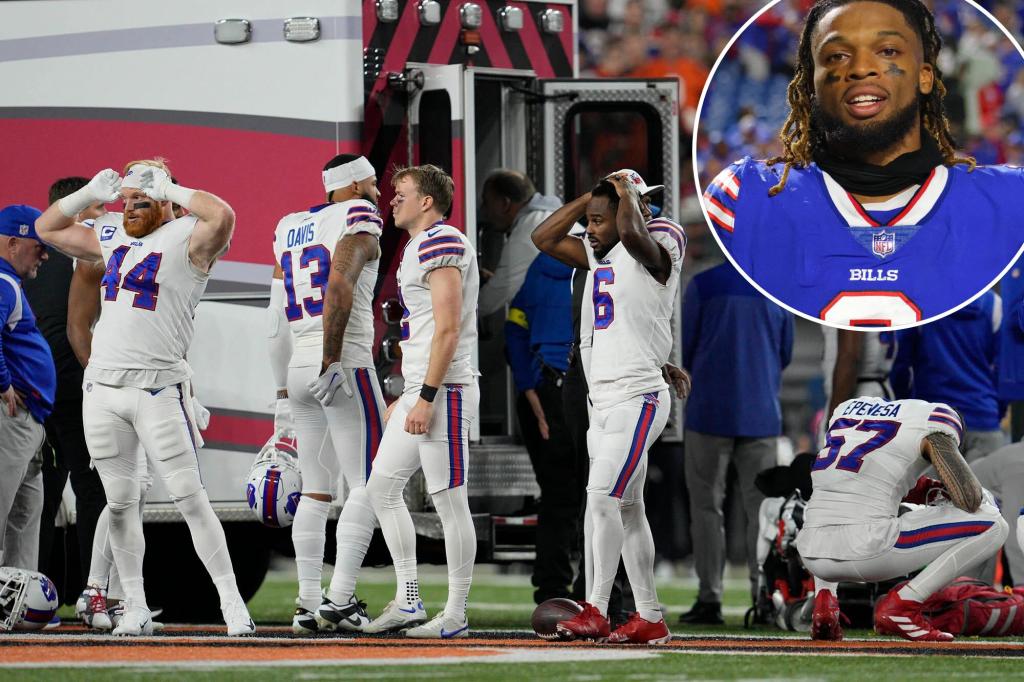