ABOVE: Larry Vogel works on a Trek Electra bike while his dog, Mr. B, sniffs around inside the Bicycle Shoppe in Fairmont. Vogel has occupied the space since 1981. FAIRMONT– On the few nice days we’ve had so far this spring, walkers and bikers have been […] 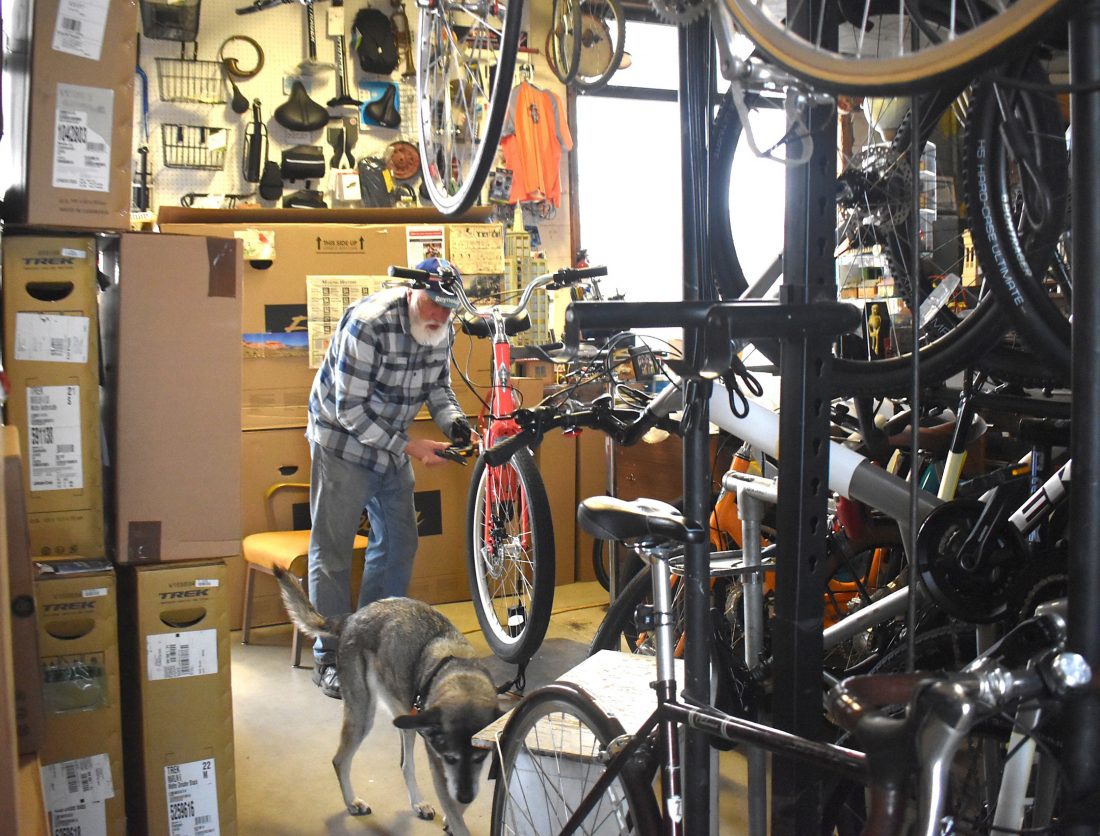 ABOVE: Larry Vogel works on a Trek Electra bike while his dog, Mr. B, sniffs around inside the Bicycle Shoppe in Fairmont. Vogel has occupied the space since 1981.

FAIRMONT– On the few nice days we’ve had so far this spring, walkers and bikers have been a common sight around town as people are eager to get out after a long winter indoors. Chances are many of the bikes you’ve seen have been purchased or serviced at the Bicycle Shoppe in Fairmont. Owner Larry Vogel has sold or serviced bikes to hundreds of people, both local and not, over his 50 years of business.

The Bicycle Shoppe, one of Fairmont’s unique businesses, has been located at 505 Lake Ave. since 1981. However, Vogel’s interest in bikes began long before that.

Originally from the area, Vogel started his career as a music teacher in Redwood Falls. He would ride his bike to school every day.

“After school, kids would come up to me and say, ‘Mr. Vogel, can you help me fix my bike?’ And I said, no, I take my bikes to the Twin Cities for that,” Vogel said.

When spring arrived, Vogel said he began going on bike rides on Sunday afternoons. What started as a small group of children joining him grew to 25 and a few parents and then to a large group of about 60 students and 10 parents. They would ride 15 to 20 miles on Sundays.

Students continued to ask Vogel for help with their bikes so he started to do what he could and learned more along the way.

However, a teacher friend of Vogel’s persuaded him to leave his teaching job in 1972 to embark on a cross country bike trip with the intention of riding to British Colombia. While they never made it to British Columbia, Vogel ended up traveling to Italy around that time. While there, he got a bike so that he could easily get around.

“I asked if maybe I could buy nine more bikes to take home and sell them. I didn’t at that point envision opening a bike shop,” Vogel said.

Ten bikes came over on a slow ship from Italy. Vogel was in an Army Reserve band at the time, so his dad, who was a farmer, drove a truck over to Chicago to get them off the ship.

When Vogel was back in Fairmont, he began selling the foreign bikes out of a friend’s garage. He didn’t need to advertise because he said people knew he rode bike around town and had knowledge of bikes.

“The next spring I found a place to sell the bikes downtown, which was the old Gamble Store,” Vogel said.

After the second or third year there, Vogel said the building next door experienced a fire so in the middle of the night he had to move all of his bicycles into an old church that he owned at the corner of 4th Street and Prairie Street in Fairmont.

He sold bikes out of there a few more years before bike company Schwinn approached him and asked if he would carry their bikes. At that time Vogel had only sold imported bikes. However, Schwinn wanted Vogel to move into another building.

He bought the current building and began selling bikes out of it in 1981. Over all of those years, Vogel said there were high moments and low moments– but there has been two booms. The first was in the early 70s when he got into the bike business because there was an embargo on oil so many people opted to bike around rather than wait to get gas.

In March of 2020, everyone was staying inside, but as businesses were closed and kids were doing online learning, people started spending more time outside when the weather got nice.

As the demand for bikes went up, the manufacturers couldn’t keep up.

“Initially when Trek approached me, I said I wasn’t interested (in electric bikes). I said bikes were for exercise and getting here and there,” Vogel said.

However, he took one for a ride and over time has become a big fan of electric bikes, along with everyone else.

While he doesn’t have 1,000, he has more inventory now than ever before. In the winter, Vogel received a shipment of 150 bikes from Trek, including 45 electric bikes. He had been waiting for the bikes for almost two years but it took this long for the manufacturer to produce and deliver the bikes.

The many large boxes fill a large portion of the Bicycle Shoppe. While the store has a great view of Lake Sisseton, it’s just 900 sq. ft. and Vogel said that Trek recommends 4,000 sq. ft. minimum for a store.

Over the last 50 years, Vogel has operated as mostly a one-man shop, with part-time help from time to time. Now, he’s looking at retiring, but is faced with a dilemma He’s had several offers from bike shops in the cities to buy his entire inventory because there’s a demand for it and limited bikes available.

“I want to keep the shop in Fairmont, but if I sell my inventory, what do I sell? Trek doesn’t have enough bikes to fill a shop and they won’t have any until late next year. I would like to see a shop remain in Fairmont, and so would Trek,” Vogel said.

When Vogel got started, there were no bike shops around. Even now, the nearest Trek dealership is 120 miles away in Sioux Falls. The only other Trek bike shops in the area are in Mankato and Marshall.

Bikes are sold at stores like Walmart, but it can be difficult to find someone with knowledge to service them. Vogel stressed that if he were to sell the business, the person needs to know a lot about bicycles and not be someone just looking to own a business.

The local shop here has built up a good reputation. Vogel has people from parts of Iowa, South Dakota, Wisconsin and other parts of the state come to him to buy a bike or have him work on a bike.

He said he thinks word of mouth between bike enthusiasts has led to the traffic he gets at his bike shop.

“I’ve sold enough bikes in the area that it would be nice to have someone repair all of the bikes I’ve sold here,” Vogel said.

This could be a case of ‘you don’t know what you have until it’s gone,’ though Vogel hopes not. Anyone with a serious interest in the shop is welcome to contact Vogel at 507-238-1092.

Sat Apr 23 , 2022
Tigers legend and future Hall of Famer Miguel Cabrera joined the 3,000 hit club on Saturday against the Rockies, cementing his spot as the 33rd member of the illustrious list. The hit, a single, came in the first inning of the scoreless game. After recording his 2,999th hit on Wednesday night […] 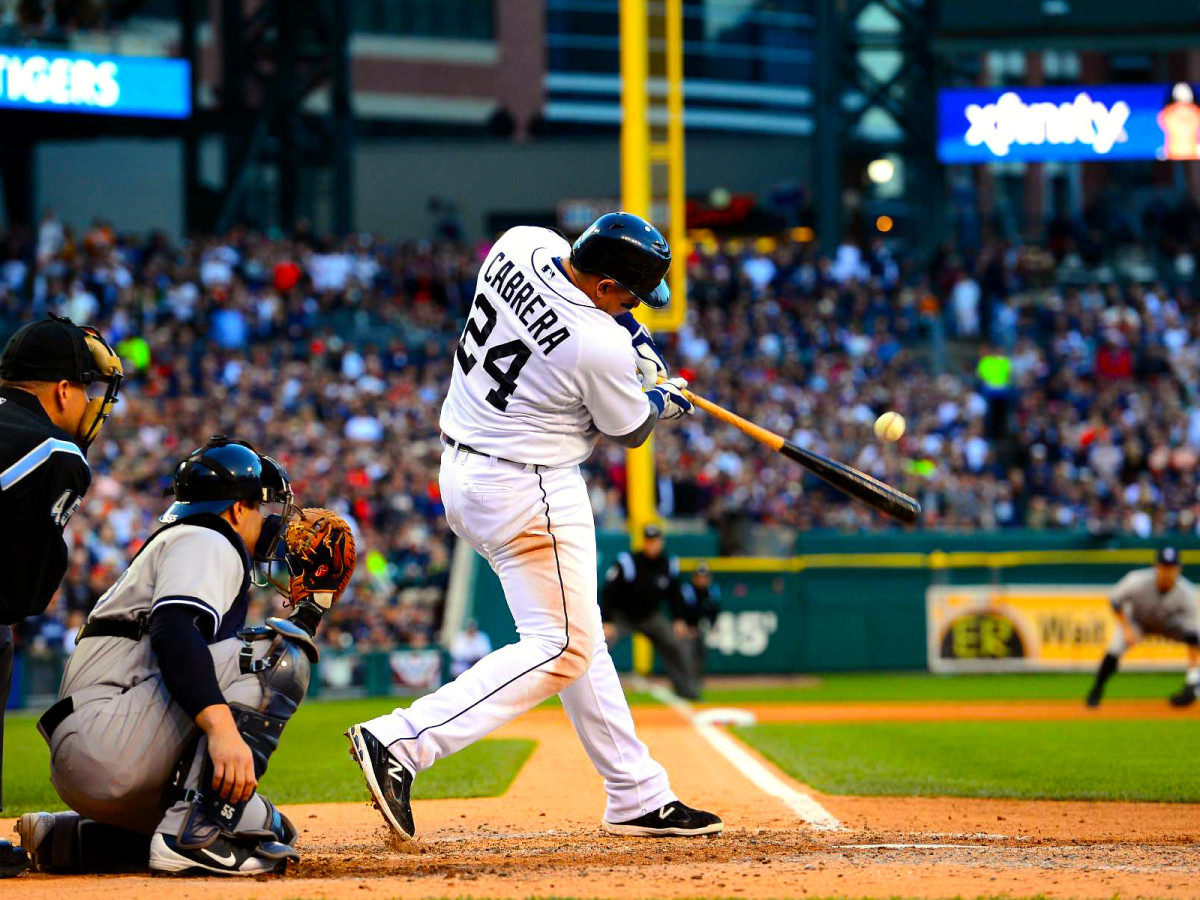