By Charlie Walters SAN FRANCISCO — A local sports radio producer overcame much more than just the challenges of rigorous training to become an “American Ninja Warrior.” Sports are a given in Chris O’Connell’s daily life, whether he’s producing sports at 95.7 the game, or training for the competition-based reality […]

SAN FRANCISCO — A local sports radio producer overcame much more than just the challenges of rigorous training to become an “American Ninja Warrior.”

Sports are a given in Chris O’Connell’s daily life, whether he’s producing sports at 95.7 the game, or training for the competition-based reality show. It’s easy to see his love for athletics.

However, it’s what you can’t see about his past that fully tells his story.

“When I was three years old I found out — my parents found out — I had a congenital heart disorder,” O’Connell explained.

As a youngster, sports were a forbidden fruit for O’Connell, though he admits he “was always a sports enthusiast.” The only problem was his doctor told him to keep his heart rate down, which kept him away from any strenuous physical activity until adulthood.

“I barely did any workouts before I was 21,” said O’Connell. That’s how old he was when a new doctor he’d seen gave him the green light to begin working out.

“For the first half of my life they told me to slow down,” said O’Connell. “So if I’m going to exercise, I’m going to train for American Ninja Warrior and do that.”

Chris trained for his chance at a spot on the show for three years until he was ready to send in his audition tape, right around the time his wife prepared to birth their first child….

“Within two months, my life changed completely. I wanted to try out for ‘ANW.’ Instead, I found out I’d need my second heart surgery,” O’Connell said. “I was supposed to be in there [the hospital] for three days; I was in there for 11. My wife stayed by my side the entire time, sleeping on a cot when she was three months pregnant.”

After surgery, Chris had to recuperate for 12 weeks. It was during that time his son Cavin was born, leading to another challenge life threw his way.

“At his two week checkup, that’s when we found out he needed heart surgery too,” he said.

“I have to slow him down. He’s also my little ninja. He swings on the ropes and runs up the wall,” O’Connell said.

Eight years after the birth of his son, the two shared the national stage together on “American Ninja Warrior.” O’Connell came up an obstacle short, but if his story has taught us anything, overcoming obstacles is what he does best…

” Still have yet to hit the buzzer. Next year I want to hit that buzzer and be on top of that wall,” he said.

LA’s New 6th Street Bridge Has Bike Lanes, But Will They Protect Cyclists?

Mon Jul 25 , 2022
Start your day with LAist Sign up for the Morning Brief, delivered weekdays. They’re better than nothing, but local cyclists say the bike lanes on the newly opened 6th Street Bridge also could be much better. More than a decade in the remaking, the new viaduct spans over the Los […] 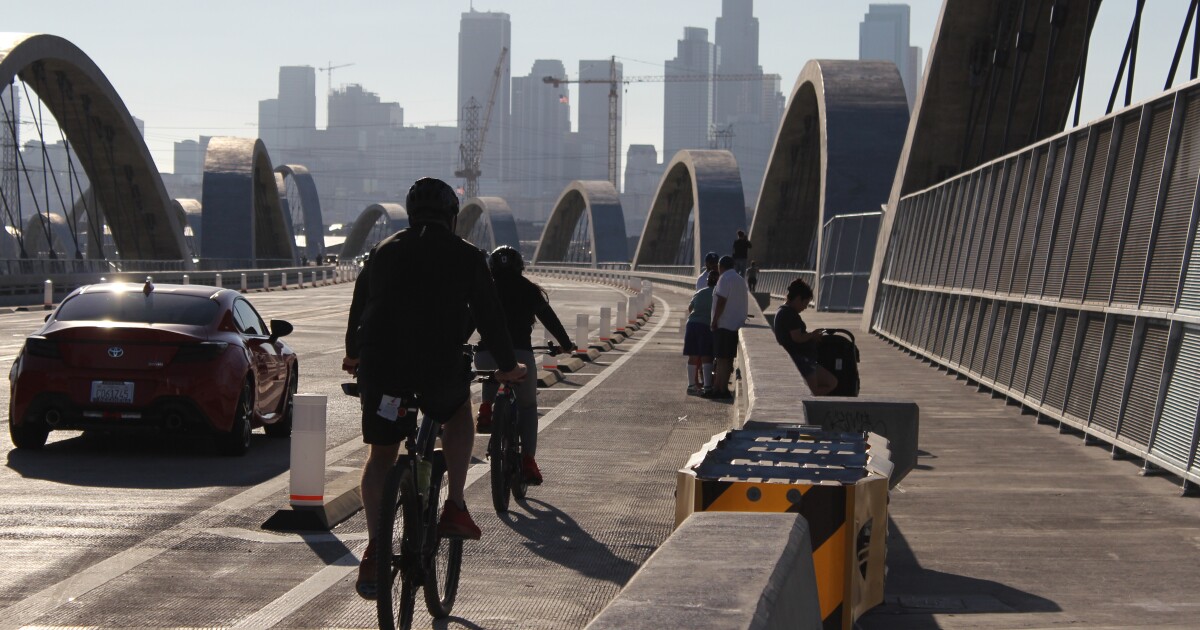