FILE – Sen. Joe Manchin, D-W.Va., speaks to reporters outside the hearing room where he chairs the Senate Committee on Energy and Natural Resources, at the Capitol in Washington, July 19, 2022. Manchin announced Wednesday, July 27, that he had reached an expansive agreement with Senate Majority […]

FILE – Sen. Joe Manchin, D-W.Va., speaks to reporters outside the hearing room where he chairs the Senate Committee on Energy and Natural Resources, at the Capitol in Washington, July 19, 2022. Manchin announced Wednesday, July 27, that he had reached an expansive agreement with Senate Majority Leader Chuck Schumer which had eluded them for months on health care costs, energy and climate issues, taxing higher earners and large corporations and reducing federal debt. (AP Photo/J. Scott Applewhite, File)

The two Democrats said the Senate would vote on the wide-ranging measure next week, setting up President Joe Biden and Democrats for an unexpected victory in the runup to November elections in which their congressional control is in peril. A House vote would follow, perhaps later in August, with unanimous Republican opposition in both chambers seemingly certain.

The reversal was stunning, and there was no immediate explanation for Manchin’s abrupt willingness to back a bolder, broader measure. Since last year, he has used his pivotal vote in the 50-50 Senate to force Biden and Democrats to abandon far more ambitious, expensive versions. He dragged them through months of negotiations in which leaders’ concessions to shrink the legislation proved fruitless, antagonizing the White House and most congressional Democrats.

“This is the action the American people have been waiting for. This addresses the problems of today — high health care costs and overall inflation — as well as investments in our energy security for the future,” Biden said in a statement. He added, “If enacted, this legislation will be historic, and I urge the Senate to move on this bill as soon as possible, and for the House to follow as well.”

Tellingly, Democrats were calling the measure “The Inflation Reduction Act of 2022” because of provisions aimed at helping Americans cope with this year’s dramatically rising consumer costs. Polls show that inflation, embodied by gasoline prices that surpassed $5 per gallon before easing, has been voters’ chief concern. For months, Manchin’s opposition to larger proposals has been partly premised on his worry that they would fuel inflation.

Besides inflation, the measure seemed to offer something for many Democratic constituencies.

It dangled tax hikes on the wealthy and big corporations and environmental initiatives for progressives. And Manchin, an advocate for the fossil fuels his state produces, said the bill would invest in technologies for carbon-based and clean energy while also reducing methane and carbon emissions.

“Rather than risking more inflation with trillions in new spending, this bill will cut the inflation taxes Americans are paying, lower the cost of health insurance and prescription drugs, and ensure our country invests in the energy security and climate change solutions we need to remain a global superpower through innovation rather than elimination,” Manchin said.

Schumer called the bill Congress’ “greatest pro-climate legislation.” He said it would “take on Big Pharma and lower prescription drug prices, tackle the climate crisis with urgency and vigor, ensure the wealthiest corporations and individuals pay their fair share in taxes, and reduce the deficit.”

The measure would reduce carbon emissions by around 40% by 2030, Schumer and Manchin said. While that would miss Biden’s 50% goal, that reduction, the measure’s climate spending and the jobs it would create are “a big deal,” said Sen. Jeff Merkley, D-Ore., an environmental advocate who had been upset with the absence of those provisions until now.

The overall proposal is far less aspirational than the $3.5 trillion package Biden asked Democrats to push through Congress last year, and the pared-down, roughly $2 trillion version the House approved last November after Manchin insisted on shrinking it. Even then, Manchin shot down that smaller measure the following month, asserting it would fuel inflation and was loaded with budget gimmicks.

In a summary that provided scant detail, Democrats said their proposal would raise $739 billion over the decade in new revenue. That included $313 billion from a 15% corporate minimum tax that a Manchin statement suggested would affect only “billion-dollar companies or larger.”

The agreement also contains $288 billion the government would save from curbing pharmaceutical prices and $124 billion from beefing up IRS tax enforcement. Another $14 billion would come from taxing some “carried interest” profits earned by partners in entities like private equity or hedge funds.

The measure would spend $369 billion on energy and climate change initiatives and $64 billion to extend federal subsidies for three more years for some people buying private health insurance. Those subsidies, which lower people’s premiums, would otherwise expire at year’s end.

That would leave $306 billion for debt reduction, an effort Manchin has demanded. While a substantial sum, that’s a small fraction of the trillions in cumulative deficits the government is projected to amass over the coming decade.

Sen. John Cornyn, R-Texas, said the Democratic agreement would be “devastating to American families and small businesses. Raising taxes on job creators, crushing energy producers with new regulations, and stifling innovators looking for new cures will only make this recession worse, not better.”

But if Democrats can hold their troops together, GOP opposition would not matter. Democrats can prevail if they lose no more than four votes in the House and remain solidly united in the 50-50 Senate, where Vice President Kamala Harris can cast the tie-breaking vote.

“This agreement is a victory for America’s families and for protecting our planet,” said House Speaker Nancy Pelosi, D-Calif. “In light of the discussions of the past year, this agreement is a remarkable achievement.”

The bill lacks increased tax deductions for state and local taxes, which some Democrats from high-tax states have demanded as the price for their support. A spokesperson for Rep. Josh Gottheimer, D-N.J., a leader of that group, did not immediately return a message seeking comment.

In the Senate, Democrats are using a special process that will let them pass the bill without reaching the 60 votes required for most legislation there. To use that, the chamber’s parliamentarian must verify that the bill doesn’t violate the chamber’s budget procedures, a review now underway.

Schumer and Manchin said leaders committed to revamp permitting procedures this fall to help infrastructure like pipelines and export facilities “be efficiently and responsibly built to deliver energy safely around the country and to our allies.”

Sierra Club Legislative Director Melinda Pierce said her group wanted to read the agreement’s details but was glad Biden and Schumer “remained resolute in finding a path to pass once-in-a-generation investments in our communities, our economy, and our future.”

Manchin just last week said he would only agree to far more limited legislation this month on prescription drugs and health care subsidies. He said he was open to considering a broader compromise on environment and tax issues after Congress returned from a summer recess in September, an offer that many Democrats considered dubious because of lawmakers’ abbreviated pre-election schedule.

Thu Jul 28 , 2022
The new bus and bike lane on SW Alder St in between 2nd and 4th Aves. (Photo: Jonathan Maus/BikePortland) A new addition to downtown Portland’s emerging slate of bike and transit infrastructure opened late last month when the Portland Bureau of Transportation (PBOT) and TriMet debuted the first phase of […] 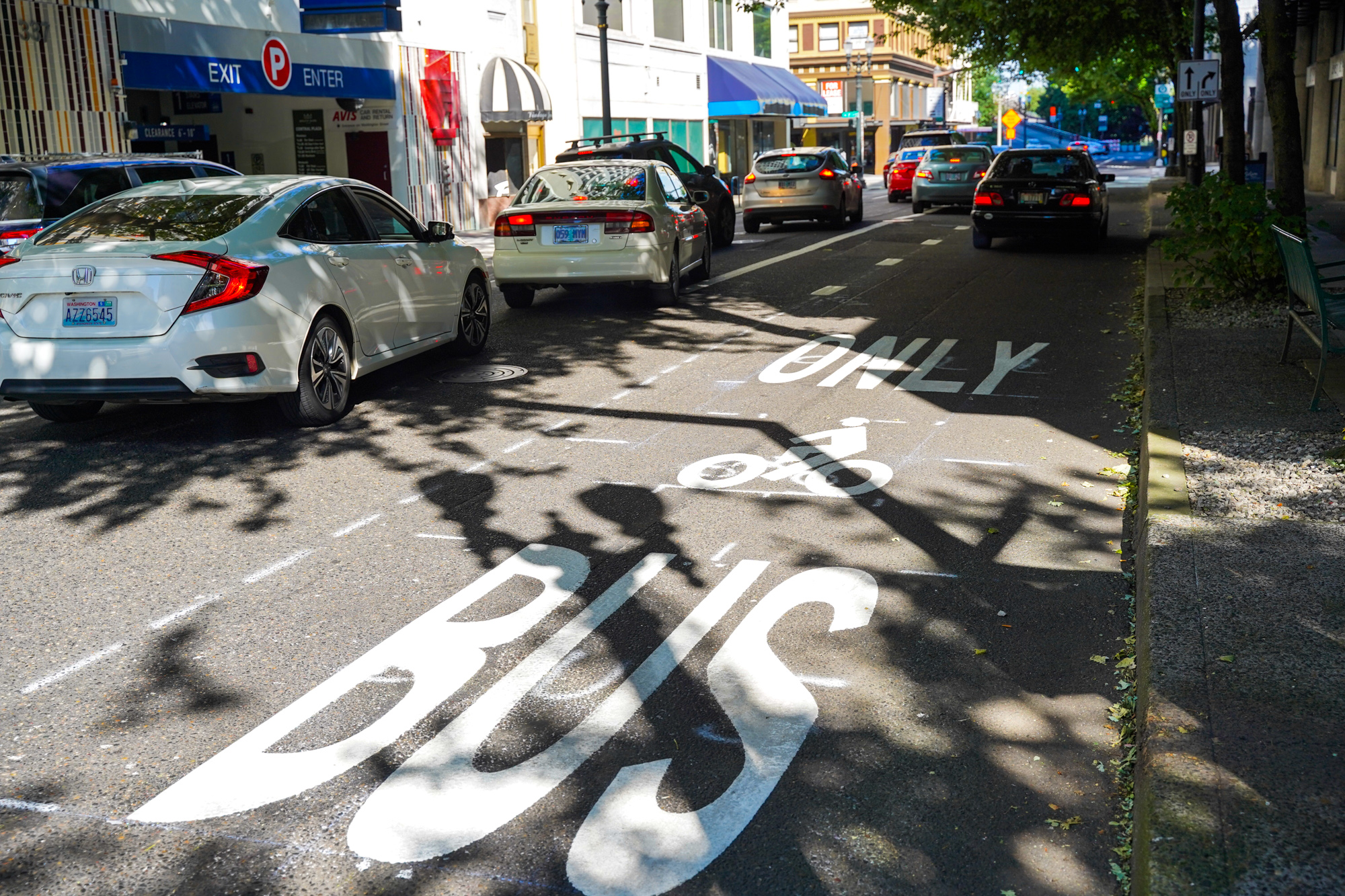