LAS VEGAS — Mark Davis didn’t just move the Raiders from the Bay Area. He also removed — from a market that has long pined for a women’s professional basketball team — the most aggressive, ambitious WNBA owner in the league: Himself. “It’s a 25-year-old league, but it feels brand […]

LAS VEGAS — Mark Davis didn’t just move the Raiders from the Bay Area. He also removed — from a market that has long pined for a women’s professional basketball team — the most aggressive, ambitious WNBA owner in the league:

“It’s a 25-year-old league, but it feels brand new to me,” Davis said, while looking over the foundation of a $40 million training center for his Las Vegas Aces, going up next door to the Raiders’ headquarters in Henderson, Nev.

“We have energy. We see the potential. … How are we going to grow this game and women’s sports without being disruptive?”

Davis is disrupting things. His biggest splash in this fast-growing sports market is massive Allegiant Stadium, the Raiders’ new home that looms across the freeway from the Strip.

But his impact since acquiring the Aces might be even more landscape changing. Since buying the team in 2021 from MGM Resorts, Davis is proving to be an ambitious, big-picture ally of the women’s game.

“This is Mark driven,” said Jennifer Azzi, the former Stanford guard and the Aces’ new director of business development. “This is all his vision.”

• Davis hired an impressive front office, including Azzi and her wife, Blair Hardiek (another blow to Bay Area WNBA fans who envisioned Azzi as perhaps president of a local expansion team).

• Davis hired Becky Hammon, thought to be on track to become the NBA’s first female head coach, from the San Antonio Spurs. The hiring shook up the WNBA; Davis will pay Hammon more than $1 million, a league-record salary.

• The 80,000-square-foot training facility — which will house offices, two training courts and a leadership academy — will open next spring.

• And Davis plans to push for revenue streams that eventually can elevate the WNBA’s collectively bargained salary structure and keep players at home. WNBA players currently are paid so little that they play year-round, chasing lucrative contracts overseas in places like Russia, where Phoenix Mercury center Brittney Griner is in custody on a controversial drug charge.

“Keeping them here is the goal,” Davis said. “We’ve got to get these women really good contracts. We’re not only trying to win on the court. We want to keep them at home and let them make an impact in their communities.”

Davis didn’t think about WNBA ownership when he was in Oakland. He was too busy pursuing a stadium deal and dealing with his Coliseum co-tenants, the A’s.

In the process of relocating to Las Vegas, he bought four Aces season tickets. They happened to be right next to Bill Hornbuckle, the president of MGM Resorts, which owned the team.

“I kept saying, ‘Bill, you’ve got to pay these women more,’” Davis said. “He finally said, ‘Listen, if you want them to make more money, you pay them. You buy the team.’”

Davis comes by his interest through DNA. Al Davis was a longtime women’s basketball aficionado and a follower of UConn’s Geno Auriemma.

“He knew where all the players went to high school,” Mark Davis said of his late father. “He followed it like he followed football.”

The son is a basketball fan and was a fixture with the Showtime Lakers when the Raiders shared the L.A. market. Davis not only enjoyed the product but watching how owner Jerry Buss built the brand.

“Jerry was a genius,” Davis said.

However, the Raiders are his primary model for how he wants to run the Aces. Davis believes that the strength of the Raiders has been its former players and their connection to the team. As soon as he bought the Aces, he set about building an alumni network. When Azzi received an invitation for an Aces weekend in Las Vegas last summer, she was unsure why.

Then it dawned on her: She had played for the Salt Lake City WNBA franchise, which moved to San Antonio (where Azzi retired), which eventually moved to Las Vegas to become the Aces.

“Mark considers us all alumni of the Aces,” Azzi said.

And that includes Hammon, who was undrafted by the WNBA but spent most of her 16-year playing career with the San Antonio Silver Spurs.

When Azzi and Hardiek came to visit, they became intrigued. Davis had filled his team-president position with Nikki Fargas, who had been the head coach at LSU. She is married to former Raiders running back Justin Fargas and is from Azzi’s hometown of Oak Ridge, Tenn.

Soon, Azzi and Hardiek were on board. Azzi quit her administration job at USF, Hardiek left her position as global director of the NBA Academy, they packed up their two children, Macklin, 5, and Camden, almost 2, sold their Mill Valley home and relocated to the desert. Hardiek became the chief marketing officer.

“It’s been good beyond our wildest dreams,” said Azzi, who was a founding player of the ABL, which lasted two seasons before folding because of competition from the WNBA. “With my history in the game, I wanted to be a part of this. To be able to do things I couldn’t do in my other roles.”

Hammon, who will join the team after the Spurs’ season ends, felt the same attraction. In her introductory news conference, she said she wrestled with the decision during sleepless nights.

“The leadership of Mark and Nikki and direction they want to take the organization and the league could not be ignored,” Hammon said. “I know I’m ready to be a head coach. And this is the team that wanted me.”

Azzi had been offered WNBA jobs before but wasn’t interested in a part-time position. Davis is running the Aces like most professional sports teams: as a year-round operation.

“The only way to reach your potential is to make it a full-time situation,” Azzi said.

The WNBA has earned a spotlight in recent years for its activism. WNBA players have been groundbreaking in the area of social justice, taking stands long before other athletes did, and making a difference in their communities. In 2021, their efforts helped swing the U.S. Senate.

“That really played a big role in me wanting to be a part of this,” Davis said. “I’ve seen how strong these women are. I’m appreciative of the stance they’ve taken. They’ve shown everyone else how to do it. They said, ‘I’m going to use my vote to change this country.’ I’m proud to be a part of that.”

Within the Aces’ new training complex, Davis is building the Al Davis-Eddie Robinson Leadership Academy. Funded in part by money received through the NFL Inspire Change initiative, Davis has appointed a board of directors that includes former Raiders groundbreaking coaches Art Shell and Tom Flores, Robinson’s son and former Olympian Tommie Smith. The academy will work to address the diversity in leadership roles in sports and to increase the pool of qualified candidates.

“There will be synergy with the Aces,” Davis said. “Women in the WNBA can be some of our teachers.”

Davis’ involvement in the WNBA informed his decision to part with Jon Gruden midway through the 2021 NFL season, after a leak of the former Raiders head coach’s emails revealed homophobic, sexist and racist language.

“How could I stand for that?” Davis said. “I couldn’t. The WNBA played a big role in my decision.”

After all, Davis wants to brand the teams under the same umbrella. He can’t have one set of beliefs and standards for the Aces and another for the Raiders.

The Raiders’ value has skyrocketed since leaving Oakland, providing Davis, the majority owner, with the ability to invest in the Aces. He is part of the WNBA’s new ownership blood, along with the owners of the Atlanta Dream and New York Liberty owner Joseph Tsai. Tsai recently was fined a league-record $500,000 for providing charter flights, a competitive advantage other teams can’t match.

The new owners want to push the league to a higher level. After 25 years of the WNBA and 50 years since Title IX, Davis thinks it’s time. He’s even come up with his own soundbite.

“The first 50 years of Title IX were about participation,” he said. “The next 50 years will be about compensation.”

Incidentally, now that he’s involved in the league, he thinks the Bay Area would be a great spot for the team.

“I think Oakland would be a really great place,” he said.

By the time it finally happens, Davis might have fundamentally changed the WNBA.

Mon Mar 14 , 2022
Kamila Valieva’s first Olympics were controversial, to say the least. The 15-year-old Russian figure skater entered the 2022 Beijing Games as a frontrunner in her sport after dominating the 2022 European Championships. But after leading Russia to a win in the figure skating team event, she tested positive for a […] 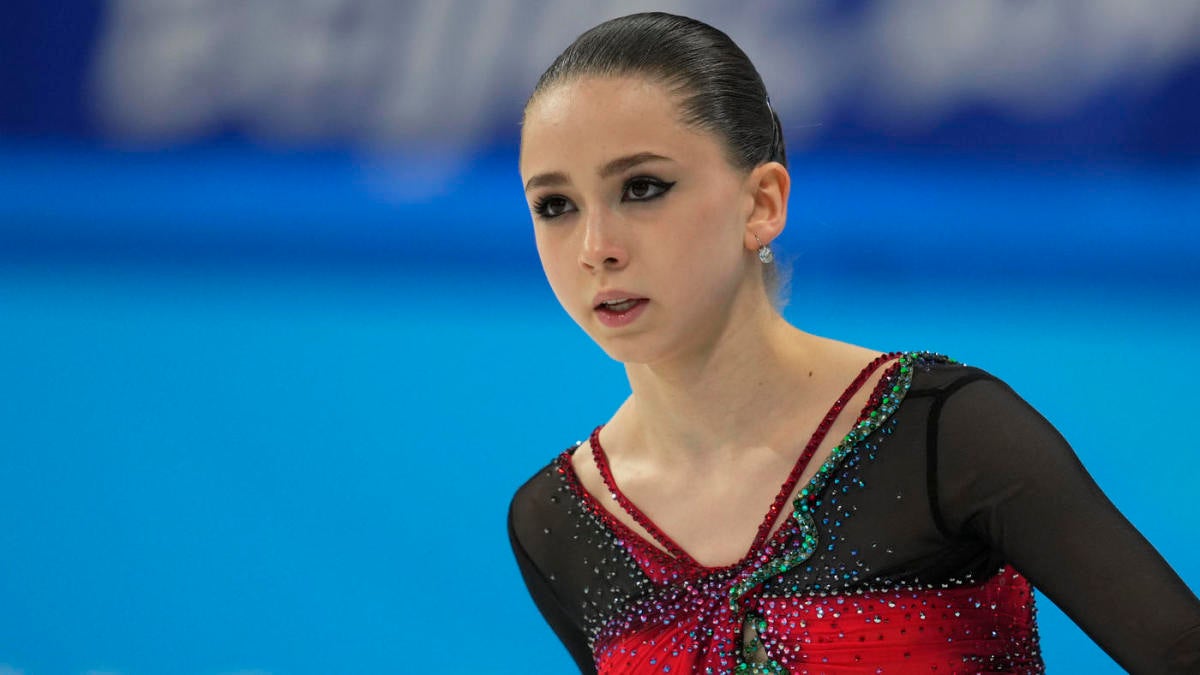