Placeholder while article actions load Modern pentathlon has always been something of an odd duck among the Olympic sports, a mash-up of competitions — fencing, swimming, horse riding, pistol shooting and cross-country running — that to modern eyes seemingly have little to do with one another. And for years, the […]

Modern pentathlon has always been something of an odd duck among the Olympic sports, a mash-up of competitions — fencing, swimming, horse riding, pistol shooting and cross-country running — that to modern eyes seemingly have little to do with one another. And for years, the sport’s governing body has had to justify its existence to Olympic decision-makers, whether by shortening the competition or changing the format to attract an audience beyond the confused onlookers who happen to stumble upon it every four years.

On Tuesday, modern pentathlon’s governing body UIPM announced a change that will go beyond mere tinkering. It will drop the equestrian portion entirely and replace it with what it’s calling an “obstacle discipline,” in which two to four athletes will race one another over a 100-meter course while surmounting numerous impediments: steps, swings, walls, rings, wheels, balance beams, ladders, monkey bars and a “tsunami” curved wall at the finish.

The changes, described by UIPM in its news release as “mouth-watering,” are intended to “reduce the cost and complexity of Modern Pentathlon at the Olympic Games.” The obstacle course was chosen to replace equestrian because of its popularity among all age groups, its accessibility to all athletes and its simple infrastructure.

The obstacle course will first get a tryout next month at an event in Turkey, after which the UIPM Congress will vote to make the change permanent. However, the old format that features horses will still be used at least once more, at the 2024 Paris Olympics, because the lineup for those Games already has been set in stone. If all goes according to plan, the new modern pentathlon will get its Olympic premiere at the 2028 Los Angeles Games, though as of now it’s not on the provisional program.

The change has been in the works for months, particularly after the Tokyo Olympics in 2021 when Germany’s modern pentathlon coach, Kim Raisner, slapped a rider’s horse after the horse refused to jump a fence, drawing outrage from around the world. But not everyone is happy that the equestrian portion of the event is about to be jettisoned, namely those who specialize in show jumping.

“Instead of looking at themselves and their own management of the sport, the UIPM lazily pointed the finger at riding. They say the root of their problems are that horses prevent participation however, this ignores the inconvenient truth, that the wider equestrian sports of dressage, eventing and showjumping remain safe in the Olympics,” Kate Allenby, a British modern pentathlete who won bronze at the 2000 Sydney Games, wrote earlier this month at Inside the Games. “The UIPM’s decision to drop show jumping, not only changes the sport fundamentally, it destroys it. It brings an end to the sport that [IOC founder Pierre de Coubertin] believed would produce the ‘complete athlete.’ It will no longer be modern pentathlon, it will be a new sport.”

Pentathlon United, a group that wants to keep the sport’s equestrian portion, claims that UIPM did not consult with the athletes when deciding on a change. In a survey of 310 modern pentathletes conducted in April, 54 percent of them current athletes, Pentathlon United said more than 95 percent are unhappy with the way UIPM conducted the change and more than 93 percent are unhappy about the sport’s direction. More than 77 percent of the athletes surveyed said it was unlikely they would stay in the sport if the equestrian portion is dropped.

“We’re not just a pick-and-mix sport where you just choose the five most convenient sports and chuck them all together,” 2020 Olympic gold medalist Joe Choong of Great Britain said earlier this month. “We are a legitimate Olympic sport and we’ve got a very proud history. I think it’s quite insulting to throw that out so readily.”

Fri May 27 , 2022
A deadly shooting at a Texas elementary school Tuesday left 19 children and two adults dead. It was the deadliest school shooting in Texas history and occurred four years after a gunman fatally shot 10 people at Santa Fe High School in the Houston area. Ahead of the Mavericks and […] 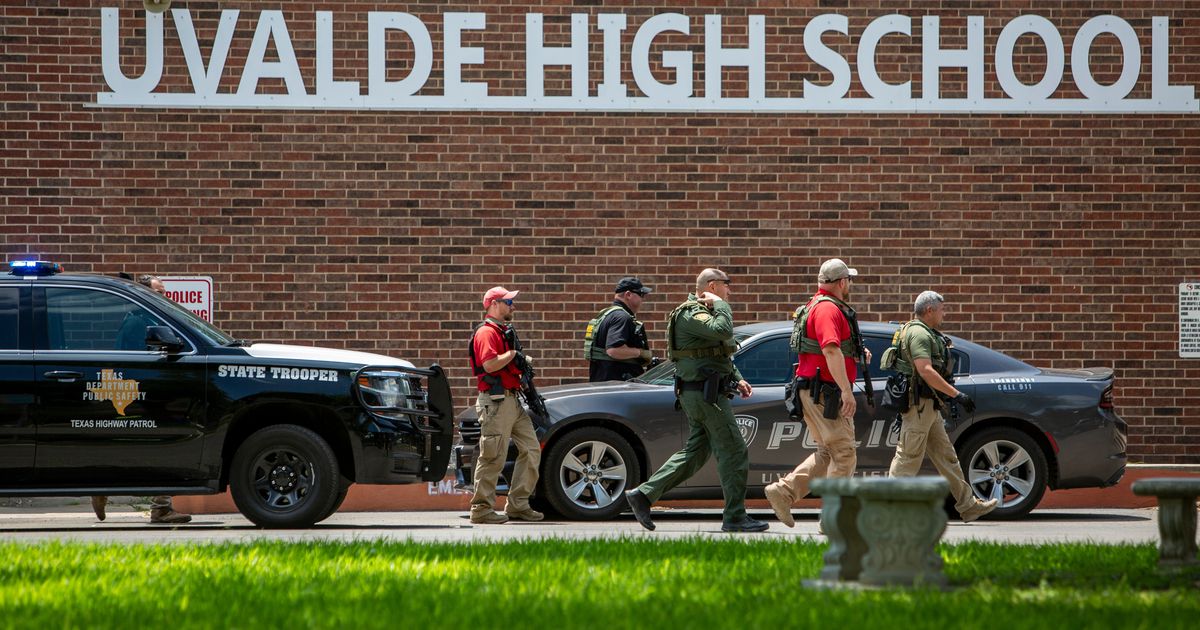