The Ukrainian Sports Club was founded in 1947 as tens of thousand of Ukrainian migrants settled in New York. Today, the team competes in the historic Cosmopolitan Soccer League and continues to serve a special function for generations of immigrants. Adi Talwar The NY Ukrainians during a sunny afternoon match […]

The Ukrainian Sports Club was founded in 1947 as tens of thousand of Ukrainian migrants settled in New York. Today, the team competes in the historic Cosmopolitan Soccer League and continues to serve a special function for generations of immigrants.

Daybreak here means evening in Ukraine, and usually a pause to the worst of the shelling. It also marks the start of Vovk’s work on behalf of his home country. Before a recent job change, he served as a manager at a logistics company that began delivering hundreds of tons of food and humanitarian aid to Ukraine after the Russian military invaded.

On weekends, Vovk returns to the community that first anchored him to the New York City metro area: the Ukrainian Sports Club, also known by its Ukrainian initials YCK. Shortly after arriving in 2013, Vovk spotted a sign for the club on an East Village storefront, joined the soccer team and forged a bond with the 75-year-old organization. Two years ago, he moved from the pitch to the board of directors.

“I couldn’t play any longer, but it was too important to me to not help the club,” he said.

The team competes as NY Ukrainians in the historic Cosmopolitan Soccer League and continues to serve a special function for generations of Ukrainian immigrants in the area. More recently, the club has embraced the changing demographics of New York City. These days, few of the first-team players have Ukrainian roots, but the club maintains its identity through its alumni, members and long-time traditions.

“Even though you’re not from Ukraine, the moment you wear that Ukraine jersey, the Ukrainian shield is touching your heart and you have to support all the Ukrainian people who are fighting for their freedom,” said first-team manager Francesco Rainieri. “On the field, we have to reflect that fight for freedom as well.”

On June 12, they will play their biggest match in years, a playoff on Randall’s Island between the second and third place teams in the Cosmopolitan League’s second division. The winner earns promotion to the top flight.

The game is a fitting end to a season of hardship and hope, with the club and its affiliates fundraising for the relief effort in Ukraine while renovating a newly purchased headquarters on Manhattan Avenue in Greenpoint. The club has sent money to the organization Razom, a U.S.-based nonprofit that funds democracy-building projects and cultural-exchange programs in Ukraine. Members, like Vovk, have pitched in through their work and in other personal ways.

“This is our war as well, and this is how we can fight,” Vovk said. “We are not in Ukraine and we can’t take up weapons and defend our country, but we can contribute humanitarian aid, contribute to our families there.”

‘Some shoulders near you’

On a sunny Sunday in late April, NY Ukrainians, seeking a top three finish and a chance at promotion, faced off against SC Eintracht on their home field at McCarren Park. Before the match—a 5-1 Ukrainians victory—the two teams linked up at midfield for what has become a weekly display of unity between opponents.

Players paused to shake hands and pose for photos holding a blue and yellow Ukraine flag. While opposing clubs have offered their support, the bond among teammates has also grown stronger, said midfielder Roman Semenko.

“Everyone from the team is like friends, family and they are supporting me and supporting each other,” Semenko said. “It makes me feel like people care and have empathy. It helps to know you have some shoulders near you.”

Semenko, who lives on the Upper West Side, said he speaks frequently with his family members in various parts of Ukraine—his parents are scholars in his hometown, located in the Central portion of the country; his brother is a doctoral candidate in Kyiv. A close friend is involved in the fighting in the eastern portion of the country, he said. Normal life goes on in New York City, but real threats loom in the background.

“I never thought that with war, in some sense, I’d get used to it,” he said. “But I talk with my parents every day. I hear the air defense alarm in the city.”

Rainieri, the NY Ukrainians coach, said the current war has weighed heavily on some players and club members, some of whom have friends who died fighting the Russian military.

“Ever since the war started, they are not fully focused on playing,” he said.

It is an experience that echoes earlier generations.

The club was founded in 1947 as tens of thousands of Ukrainian migrants and refugees fled the deadly oppression of the Soviet Union and the devastation of World War II to settle in New York City. In those days, the CSL was the top league in the United States, and NY Ukrainians soon became one of the top teams. They won a national championship in 1965.

In 1976, the club bought a building on Second Avenue in the East Village, the heart of the city’s Ukrainian community, and turned it into a sports mecca. Some of the biggest soccer teams in Ukraine, like Dynamo Kyiv and Shakhtar Donetsk, visited, as did some of the biggest soccer fans in New York City. Satellite dishes allowed the club to air international matches that few New Yorkers could see anywhere else, attracting fans of various ethnicities and rooting interests. The international vibes continued even when live foreign soccer became the norm: The club’s president specifically recalled the 2006 World Cup in Germany as a highlight in a 2020 interview with Ukrainian Weekly.

At the same time, the venue served a broader function by hosting poetry and book readings, youth association fundraisers and holiday parties. The club website now describes its goal of using “athletics as a vehicle to humanities.”

One league, 99 years of NYC history

Founded in 1923 as German American Soccer League, the five-team competition grew to include clubs from across New York City and parts of Northern New Jersey. By the mid-Century, the Cosmopolitan League—a collection of clubs representing specific ethnic enclaves—emerged as the most dominant in the United States. Its teams won 11 national championships between 1951 and 1974.

As soccer grew in popularity, the league board decided in 1977 to rebrand as the Cosmopolitan Soccer League and ordered teams to change their ethnic names. That directive didn’t last and clubs reclaimed their old affiliations five years later.

The league, one of the oldest in the country and still a top amateur competition, taps the grassroots of soccer in New York City, an immigrant scene embodied by Central American delivery workers who pack patches of turf at Flushing Meadows or Jamaican students at Bronx Park in Allerton.

“It’s always been a great way to bring people together,” said the league’s general secretary, Bill Marth. “We have teams from everywhere and there’s a lot of diversity—Asian teams, a Yemen team, two Afghan teams.”

The Cosmopolitan League also traces the history of war and political oppression over the past century, with the Ukrainian invasion the latest example.

Hungaria SC dominated the competition in the 1950s and 60s, after fielding star players who escaped the Stalinist crackdown in response to the 1956 Hungarian Uprising. The New York Pancyprian Freedoms formed in 1974 after Turkey invaded Cyprus. The club founder told the New York Times he wanted the Astoria-based club to “project the image of Cyprus.”

In that context, soccer can provide both catharsis and community.

It’s that diversity and togetherness that first attracted Josh Pratt, the new keeper of New York City’s soccer lore. Pratt founded the live-streaming service Game in Frame, which broadcasts matches from the Cosmopolitan League, United Soccer League Second Division and other local competitions. He is also the CEO, announcer and head of audience development.

“I grew up playing and obsessing over soccer my whole life and as I got older, one of the things that really occurred to me was how it connected me with totally different people I never would have crossed paths with,” Pratt said. “When we play football we have this really strong, common bond. Soccer is a universal language.”

In the grand scheme of world soccer, the upcoming match is small compared to another recent playoff for a Ukrainian side—one that ended in bitter disappointment. The men’s national team lost 1-0 to Wales on Sunday in a game that decided the last European spot in this year’s World Cup. The lone goal was a self-inflicted wound by Ukraine’s captain, who accidentally headed the ball into his own net while trying to clear a free kick.

But as in the international match, NY Ukrainians appear to have support from all corners—win or lose.

“The New York soccer community is really behind the Ukrainians,” Pratt said.

Wed Jun 8 , 2022
No 15-year-old figure skaters will be allowed to compete at the 2026 Olympics following the controversy surrounding Russian national champion Kamila Valieva at this year’s Beijing Games. A new age limit for figure skaters at senior international events was passed Tuesday by the International Skating Union in a 110-16 vote […] 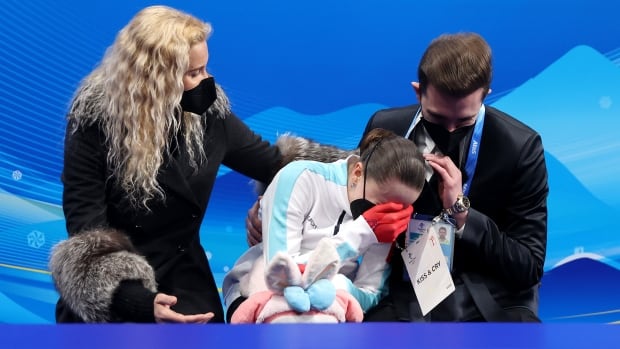