Editor’s note: If you or someone you know is having thoughts of suicide or is in emotional distress, contact the National Suicide Prevention Lifeline at 1-800-273-TALK(8255) or at suicidepreventionlifeline.org. Ohio State offensive lineman Harry Miller announced Thursday that he is medically retiring from football, citing the challenges he’s faced in […]

Editor’s note: If you or someone you know is having thoughts of suicide or is in emotional distress, contact the National Suicide Prevention Lifeline at 1-800-273-TALK(8255) or at suicidepreventionlifeline.org.

Ohio State offensive lineman Harry Miller announced Thursday that he is medically retiring from football, citing the challenges he’s faced in the last year in regards to his mental health.

Miller, a redshirt junior who was set to miss all of spring practice after playing two games in 2021 due to injury, opened up about his journey toward improving his quality of life in a two-page letter shared via Twitter.

Miller began the post by chronicling a difficult conversation he had with Buckeyes head coach Ryan Day prior to the start of last season and what transpired in the weeks that followed. Miller’s first year in Columbus coincided with Day’s first as OSU’s full-time head coach in 2019.

“Prior to the season last year, I told Coach Day of my intention to kill myself. He immediately had me in touch with Dr. Candice and Dr. Norman, and I received the support I needed. After a few weeks, I tried my luck at football once again, with scars on my wrists and throat. Maybe the scars were hard to see with with my wrists taped up. Maybe it was hard to see the scars through the bright colors of the television. Maybe the scars were hard to hear through all the talk shows and interviews. They are are hard to see, and they are easy to hide, but they sure do hurt.”

Miller then described how he felt while attempting to push through his physical and mental pain, saying that at the time, he would rather “be dead than a coward” or “be nothing at all, than have to explain everything that was wrong.”

He explained that he was “planning on being reduced to my initials on a sticker on a back of a helmet” before acknowledging how easy it can be to dismiss those who are dealing with mental health issues, whether they’re a student-athlete or not.

“I had seen people seek help before. I had seen the age-old adage of how our generation was softening by the second, but I can tell you my skin was tough. It had to be. But it was not tougher than the sharp metal of my box cutter. And I saw how easy it was for people to dismiss others by talking about how they were just a dumb, college kid who didn’t know anything. But luckily, I am a student in the College of Engineering, and I have a 4.0 and whatever accolades you might require, so maybe if somebody’s hurt can be taken seriously for once, it can be mine. And maybe I can vouch for all the other people who hurt but are not taken seriously because, for some reason, pain must have pre-requisites.

“A person like me, who supposedly has the entire world in front of them, can be fully prepared to give up the world entire. This is not an issue reserved for the far and away. It is in our homes. It is in our conversations. It is in the people we love.”

Miller, a former five-star recruit, was a starter his sophomore year during the Buckeyes’ run to the 2020 CFP National Championship Game. He started in OSU’s Big Ten championship win but he did not play in the CFP semifinal after testing positive for COVID-19, and came off the bench in the national championship game.

In the second page of his letter, Miller described his current state of mind amidst his ongoing journey before expressing his gratitude for Coach Day and the opportunity to “help others in the program.”

He concluded his statement by sharing the number for the National Suicide Prevention Lifeline (1-800-273-8255) along with the message, “There is help, always.”

“I am not angry. I had to lose my anger because I did not know if God would forgive me if I went to him in anger. I did not know how the Host of Hosts would respond to my untimely arrival, and I did not want to tempt him. So in my sadness, I lost my anger and learned many things. I learned what color blood is through the tears in my eyes. I learned that the human ear can not distinguish between the two when their drops hit a tiled floor. But above all, I learned love, the type of love that can only be pieced together by the mechanism of brutal sadness.

“And so I will love more than I can be hated or laughed at, for I know the people who are sneering need most the love that I was looking for. The cost of apathy is life, but the price of life is as small as an act of kindness. I am a life preserved by the kindness that was offered to me by others when I could not produce kindness for myself.

“We ask ‘How could this have happened?’ But that single question can not absolve us of all the questions we might have asked while it was happening.

“I am grateful for the infrastructure Coach Day has put in place at Ohio State, and I am grateful that he is letting me find a new way to help others in the program. I hope athletic departments around the country do the same. If not for him and the staff, my words would not be a reflection. They would be evidence in a post-mortem.

Mon Mar 14 , 2022
ESPN college basketball analyst Dick Vitale has dealt with unfortunate health circumstances throughout the college basketball season, as the legendary basketball announcer has been in the middle of a cancer fight and a separate issue affecting his vocal cords. Vitale announced earlier this week that his cancer was in remission […] 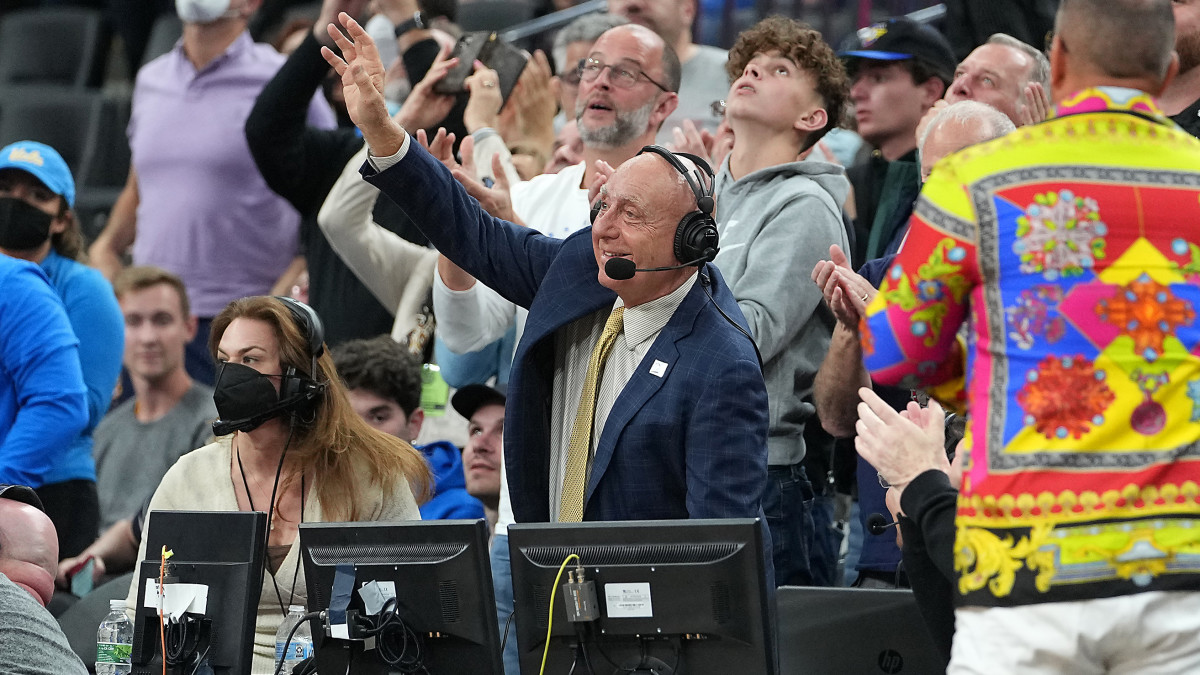