A couple of unexpected arrivals swelled the numbers today with Raleigh Gosney, Stuart Tinkler, and Masao Ishikawa all making a return to the Bunker. The last week of July began with a game at Khao Kheow where we were allocated the B & C nines. In recent weeks this course has been edging up its prices to the extent that it’s no longer competitive with many other courses in the area and may well find itself dropped off our roster.

The course was very damp underfoot with plugged balls the norm, the greens however seem to have been unaffected and were quite hard. Rain threatened all day, in fact, there was a short sharp downpour on the back nine which held up play only for a few minutes, mostly we missed the weather that looked menacing in the vicinity.

Scoring was very disappointing with a lowly thirty-one points taking first place going to Robby Watts on countback from Masao Ishikawa. A countback also for third with Hubert Stiefenhofer taking it from Craig Dows on thirty points. The real winner should have been Gary Smith with a respectable thirty-five points but for some reason, his card was not presented until after the presentation. Fortunately, Robby did the honourable thing and rang the bell lest he suffered the pangs of guilt from his ill-gotten gains. Three near pins went to Robby, Hubert, and Niall Glover.

By way of a change, we played the C and D nines at Burapha today. The course was quite wet and in hindsight, we probably should have played lift, clean, and place. There was quite a difference in the speed of greens from the C to the D course.

The skies were grey at the start of play and before too long a short heavy shower held up play for a few minutes, however, a few delicate flowers decided to take shelter after nine holes for some reason and held up the course for the rest of the round.

With a field of sixteen, we still had a few notable absentees most notably Geoff Parker who some wag said was saving his green fee to buy some new balls having lost so many in Chiang Mai last week. Also missing Raleigh and Ishi after only one game.

Scoring was very good if a little short of the heroics of our last visit where forty points weren’t enough to get in the winner’s circle. Today Bil Richardson took first place with forty playing some of the best golf he has played since joining the Bunker Boys. Robby Watts took second on countback from Niall Glover with Craig Dows rounding out the winner’s circle with thirty-six points. All the near pins were taken with the Glovers getting one each, Robby Watts and Stuart Tinkler got the other two.

The last game of the month was scheduled for Silky Oak but due to a lack of caddies at Barcelona Valley was changed at the last minute back to Eastern Star. With a few absentees again we were pushed for transport but still managed to get everybody to the course.

A nice change weatherwise with a bright breezy day and lots of blue sky and warm temperatures. There was a bit of wind but not enough to add to what was already a challenging course, particularly for those that hadn’t played much there and were unfamiliar with the layout.

Sat Jul 30 , 2022
Determining the greatest Olympian of all time is a subjective question, not simply a matter of mathematics. When set against US swimmer Michael Phelps’ collection of 23 golds, and Paavo Nurmi and Carl Lewis’ track and field collections of nine apiece, Emil Zatopek’s four do not quite stack up. But, […] 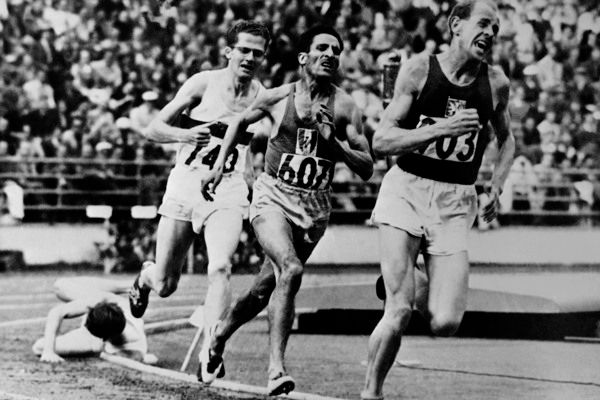