Longtime U.S. Olympic snowboarding coach Peter Foley has left his role and been suspended by the U.S. Center for SafeSport amid an investigation into allegations of inappropriate behavior. U.S. Ski & Snowboard confirmed Monday that Foley, who had been on a leave of absence since the conclusion of the 2022 […]

Longtime U.S. Olympic snowboarding coach Peter Foley has left his role and been suspended by the U.S. Center for SafeSport amid an investigation into allegations of inappropriate behavior.

U.S. Ski & Snowboard confirmed Monday that Foley, who had been on a leave of absence since the conclusion of the 2022 Winter Olympics, is no longer employed by the organization – though it is unclear whether he was let go or resigned. Spokesperson Tom Horrocks said he was unable to comment further.

News of Foley’s departure came two days after SafeSport levied a temporary suspension against him, pending a formal investigation into allegations of misconduct.

Foley did not reply to a message from USA TODAY Sports on Monday. His attorney, Howard Jacobs, wrote in an email that, to his knowledge, Foley had not yet been contacted by SafeSport “but any allegations of sexual misconduct being made against him are false.”

“Mr. Foley has not engaged in any conduct that violates the SafeSport Code, and he will cooperate with the U.S. Center for SafeSport when and if they contact him,” Jacobs wrote in the email. “He does not intend to issue any further statement.”

While SafeSport does not comment on pending investigations, the probe likely stems from allegations made publicly last month by a former Olympic snowboarder, Callan Chythlook-Sifsof. The 2010 Olympian wrote on Instagram that Foley had “taken naked photos of female athletes for over a decade,” among other allegations about the culture of the program.

After the final snowboardcross competition in the Beijing Olympics, Foley told USA TODAY Sports, “I’m super surprised by the allegations and I vehemently deny the allegations.” He did not comment further on them.

Once the allegations against him were made public, Foley was barred from accessing the athlete village during the Games. Veteran rider Lindsey Jacobellis confirmed Foley was not able to attend film review before she and teammate Nick Baumgartner won gold in the mixed team event.

U.S. Ski & Snowboard President and CEO Sophie Goldschmidt told USA TODAY Sports last month that the organization was conducting its own investigation meant to run in parallel to the outside investigation.

“We’re taking it very seriously and the investigation is underway and I hope will be completed fairly quickly,” she said on Feb. 19.

Chythlook-Sifsof declined to comment Monday, though the snowboarder reacted to Foley’s suspension with a brief message on Instagram on Friday.

“More to come, but happy with this first step,” she wrote. “Cheers to the strong women, public pressure, the grassroots activism and putting an end to Peter Foley’s 30-year cycle of abuse.”

Foley, 56, had led the federation’s snowboardcross team since its inception in 1994, a span that covered five Olympics. The Americans won six medals in that time, most recently with Jacobellis’ individual gold and mixed team gold in Beijing. 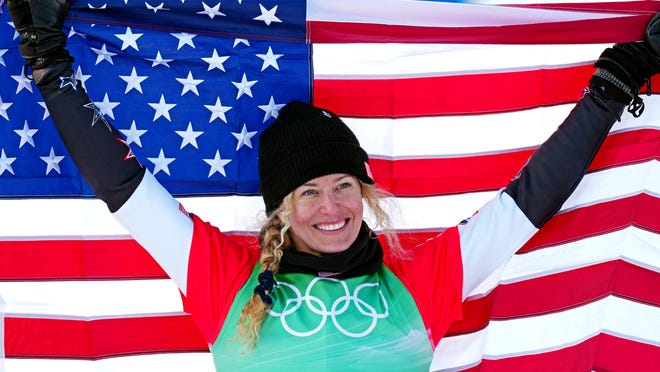 How the Sports World Is Responding to Russia's Ukraine Invasion