At the track and field world championships, distance runners compete on behalf of their countries. What’s less visible to the average fan is that most are also competing for their shoe company sponsors, which largely provide the funding that makes track and field a viable career. Even less visible to the average fan — especially if you aren’t on Instagram — is that a growing number of them are competing on behalf of professional running teams.

Think of them as content houses for professional runners, with less partying and more napping.

“There is a fine line between overdoing it, creating a persona and a character that can drain you and not lead to quality performance on the track,” Ollie Hoare, an Australian middle distance runner who competes for the On Athletics Club, said of social media. “But being able to be yourself, enjoy who you are and compete in a sport like this is a privilege.”

A decade or two ago, even a dedicated track and field fan might not have seen much of a runner like Hoare between performances at the Olympics and the world championships, which are being held in Eugene, Ore., this year. But fans today can catch up with Hoare and two of his On Athletics Club teammates, who are based in Boulder, Colo., on their weekly podcast “Coffee Club,” and get insight into his training (and his incredibly cute dog, Angus) on Instagram.

On Athletics Club was started in 2020 by On, an athletics apparel company in Switzerland. Never heard of On? Well, that’s part of the point of sponsoring a professional running club.

“It’s not a secret club that trains behind secret walls,” said Flavio Calligaris-Maibach, the head of athlete strategy at On. “We see it as an engine to drive running culture with consumers — in a dialogue with our consumers.”

The team model isn’t entirely new to track and field. In the United States, professional running groups date back to at least the 1970s, when Nike created the Athletics West team. But, historically, most top runners trained alone or in loosely affiliated groups. They were paid by shoe companies but were otherwise left alone to hire their own coaches and determine their own training.

Josh Rowe, who worked in marketing for both Nike and New Balance and is now involved in youth track and field, referred to this sponsorship model as the shotgun approach. Companies looked to sponsor enough runners in the hopes that a few would become breakout stars at the Olympics or other high-profile events, all while wearing their shoes.

But social media has changed everything, and slickly produced content designed specifically for Instagram has expedited the migration to a new sponsorship model.

On’s co-chief executive, Marc Maurer, said that the company had started the On Athletics Club as part of a sustained push to expand into North America. Although the company sponsors a number of runners and other athletes around the world, Maurer said a cohesive and personable team of runners in Boulder was the best way to introduce On to potential consumers.

They joined a crowded marketplace. While each arrangement differs slightly financially and contractually, many of America’s best distance runners are now clustered in a handful of competitive teams. Nike is the king of the pack, sponsoring three professional distance groups in Oregon, but New Balance, Hoka, Brooks, Puma and Adidas, among others, all have their own teams.

It’s a welcome change for runners who left the highly regimented college track and field structure to fend for themselves as professional athletes in their early 20s. Now some teams provide coaches, physical therapists, nutritionists and occasionally even housing, allowing the runners to focus mostly on running. The shoe companies then get a consistent group of elite athletes to test out new products, provide feedback and pump out their personalities on behalf of a brand.

And fans are following along. Williams is now looking to create a team-based cross-country event in Austin, Texas, in the winter, hoping to cater to a fan base that is becoming more interested in teams than individuals. “You couldn’t have done this 10 years ago,” Williams said. “But now you can.”

Few understand the power of social media in running like Sam Parsons, who competes for Tinman Elite, which is sponsored by Adidas. While he and some team members receive contracts that include salaries from Adidas, other members receive only gear like shoes and must find funding elsewhere.

Parsons, who will be the first Tinman Elite runner to compete for a championship on Sunday when he runs in the 5,000 meters, describes himself and most of his team members as overlooked. “I am a second-team all-American by the skin of my teeth that almost gave up more times than I can count,” he said. “And now I’m competing for a world championship.”

By aggressively marketing its team on social media and designing its own merchandise, Tinman Elite has an outsize commercial presence that belies its modest running results. “We share so much on social media and all the platforms that are presented to us,” Parsons said. “I think people watch us race and watch Tinman race and see how much fun we are having.”

Professional running groups also lessen the importance of all-or-nothing races for athletes. They don’t need a top performance at an international event for runners or their sponsors to break through; instead, they can find regular visibility on social media. “It’s less about how these athletes perform in a given race,” Rowe said, “but for a company, how do I translate my brand, how do I translate these athletes, win or lose?”

Most On Athletics Club runners have had a strong season so far, and a few were expected to perform especially well at this week’s world championships. But it did not happen. “We had kind of a rough meet,” said Dathan Ritzenhein, the team’s coach and a veteran of pro running groups himself. He said it was one of the first meets that had been a letdown.

In the past, a poor showing at the world championships could have been fatal. Contracts could be terminated, and runners could be left questioning their futures in the sport. But the On Athletics Club has a long-term outlook, in which reductions — automatic financial penalties if certain thresholds are not met — are absent from contracts, and many athletes were signed more with an eye toward the Paris Olympics in 2024 and the Los Angeles Olympics in 2028 than the world championships in 2022.

In fact, the On Athletics Club has been so successful that On is replicating the model in Europe and elsewhere. The goal in the long run is for On athletes to win the third most medals at the 2028 Olympics.

Alicia Monson, who runs the 10,000 meters, is one of the quieter On Athletics Club members, at least compared to some of her more extroverted teammates. She confessed to occasionally being uncomfortable with social media and fans who follow her day-to-day activities. But while she mostly focused on running and competing for medals, she said, fans being interested in her meant showing off a different side of her personality.

“For most of us, running isn’t our entire lives,” Monson said. “We have different things that make us interesting. The best thing we can do in marketing is showing what we are doing, and showing our personality through it.”

Yeah, but this one isn't gold: Neeraj Chopra, Indian GOAT

Sun Jul 24 , 2022
Neeraj Chopra, 2022 IAAF World Championships silver medalist. The second Indian to medal at an athletics Worlds. The first Indian man to do it. If there’s a tinge of disappointment in the colour of the medal, it’s merely a mark of the greatness of the man. Because make no mistake, […] 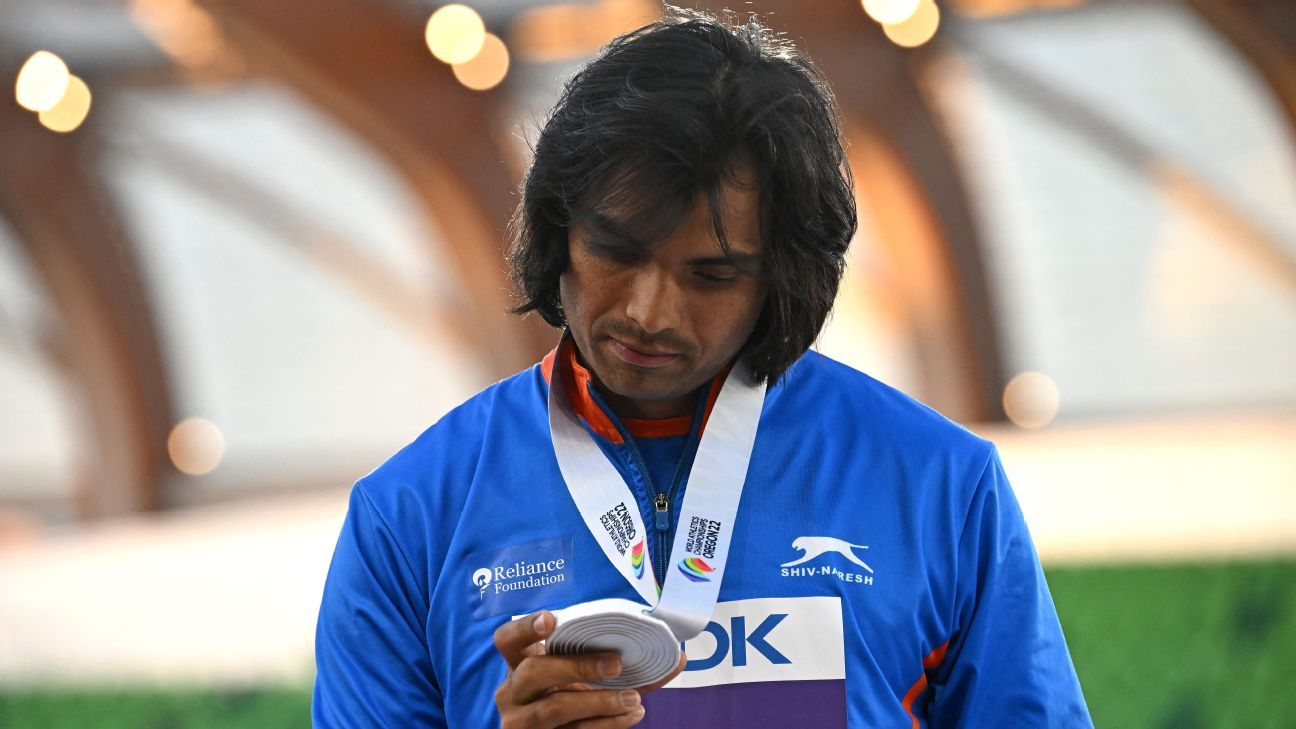