Russian Olympic athletes who participated in a rally supporting President Vladimir Putin and the invasion of Ukraine are facing a backlash, with one losing a sponsorship deal and facing a disciplinary investigation. Medallists from cross-country skiing, gymnastics, figure skating and swimming gathered on stage at the Luzhniki Stadium on Friday […]

Russian Olympic athletes who participated in a rally supporting President Vladimir Putin and the invasion of Ukraine are facing a backlash, with one losing a sponsorship deal and facing a disciplinary investigation.

Medallists from cross-country skiing, gymnastics, figure skating and swimming gathered on stage at the Luzhniki Stadium on Friday as part of the concert and entertainment program around Putin’s speech.

Olympic champion swimmer Evgeny Rylov is under investigation for attending the event, the sport’s governing body told The Associated Press.

“FINA is deeply disappointed to note the reports regarding Evgeny Rylov’s appearance at the Luzhniki Stadium during Friday’s rally. We are investigating the matter further,” the governing body said in an e-mail Tuesday.

Rylov has also lost his endorsement deal with swimwear manufacturer Speedo because of his involvement in the pro-Putin rally.

“Following his attendance at the Luzhniki Stadium in Moscow at the weekend, Speedo can confirm that it has terminated the sponsorship of Evgeny Rylov with immediate effect,” the company said. “We condemn the war in Ukraine in the strongest possible way and stand in solidarity with the people of Ukraine, our athletes and our teammates who have been impacted by the conflict.”

Speedo added it will donate the remainder of Rylov’s sponsorship fee to UNHCR, the United Nations agency caring for refugees.

Anthem played with athletes on stage

Most of the athletes, including Rylov, were pictured wearing jackets with a “Z” on the chest at the rally. The letter isn’t part of the Russian alphabet but has become a symbol of support for Russian troops after it was used as a marker on Russian armoured vehicles operating in Ukraine.

The athletes stood on stage as the national anthem was played in an apparent reference to how Russian teams at last year’s Summer Olympics in Tokyo and this year’s Winter Olympics in Beijing didn’t have the anthem at their ceremonies in the fallout from years of doping disputes.

The event was held on the anniversary of Russia’s 2014 annexation of Crimea from Ukraine, with patriotic songs and praise for troops and Russia-backed separatists.

“Not so long ago we supported them in this difficult Olympic season, now they support the war against us and our country,” Ukrainian ice dancer Oleksandra Nazarova wrote on Instagram last week with a picture of four Russian skaters taking part in the rally.

Nazarova and partner Maksym Nikitin are both from Kharkiv, the mostly Russian-speaking city in northeastern Ukraine which has been subjected to intense bombardments by Russian forces.

Since the invasion, dozens of sports banned Russian and Belarusian athletes from their events after the International Olympic Committee recommended they be expelled from competition. Belarus has been an ally of Russia in the war.

Swimming, however, had said it would allow Russians and Belarusians to compete “in a neutral capacity” but hardened its stance Wednesday with a full ban from the world championships.

Hours earlier, Rylov had said on Instagram he will boycott the swimming world championships in June and July “as a sign of support” for Russian athletes who were banned from other competitions.

There is a precedent for a Russian competitor being personally punished for supporting government policies. Gymnast Ivan Kuliak is facing a disciplinary hearing for wearing a “Z” symbol on the podium next to a Ukrainian competitor, and chess player Sergey Karjakin was suspended for six months Monday for social media posts with strident support for Putin and Russian troops.

Fri Mar 25 , 2022
This past summer, it seemed like Italy was back as a global soccer power with the embarrassment of missing the 2018 World Cup far in the rearview mirror. The Azzurri won European championship in penalties against England at Euro 2020 (played in 2021). They shot up to No. 4 […] 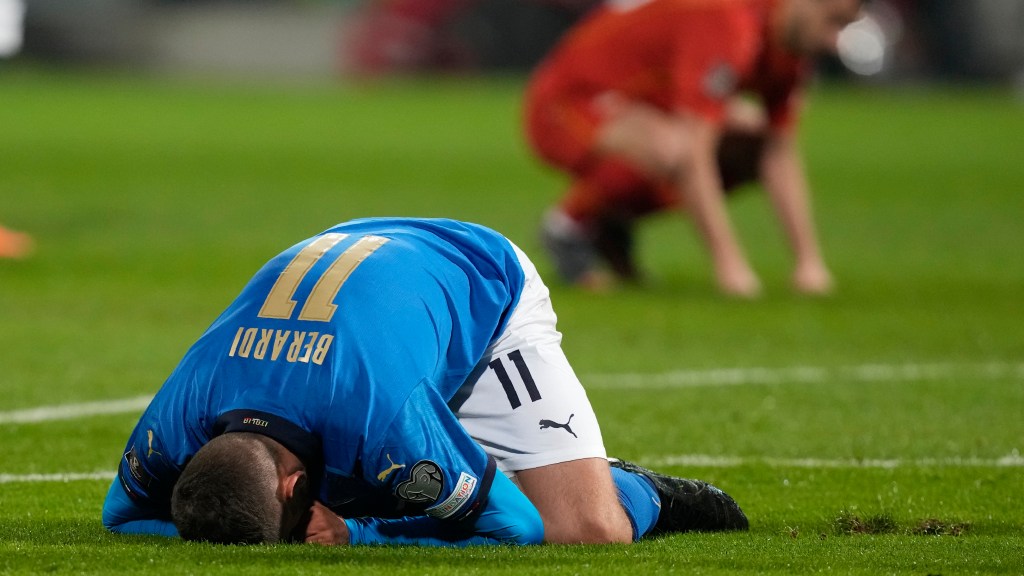