Day three at the SEA Games 2021 (Postponed to 2022) and there’s a lot to look forward to. Here’s a full preview of the event which will give you a good overview of what’s going on and the stars of these Games to watch out for. Carlos Yulo and USA […]

Here’s a full preview of the event which will give you a good overview of what’s going on and the stars of these Games to watch out for.

On Day 1 Yulo won the men’s all-around individual and Finnegan had an emotional win yesterday competing in Filipino colours for the first time.

There’s so much more going on too, here’s a full swimming preview and schedule, women’s football results and schedule, everything that happened yesterday on Day 2.

All times local in Hanoi.

Here’s the official event YouTube page, and today’s live stream for the event is below, keep an eye here for streams of different sports throughout the day:

There’s a lot of love at the SEA Games in Vietnam, Nguyen Tien Trong won the men’s long jump then took much greater leap of faith by proposing to girlfriend and Vietnam sepak takraw player Thi Phuong Trinh the second he stepped off the podium.

Goals from Nguyen Van Tung and Ho Thanh Minh helped the hosts qualify in top spot from Group A, while Indonesia secured their safe passage to the semis too.

Keisuke Honda’s Cambodia have an outside chance of qualifying if they beat Malaysia and Thailand lose to Laos but they need a mini-miracle to pull it off.

Today the group stage games came to a close and we know our semi-finalists.

Thailand glided past Laos 5-0, and Myanmar had a crucial 1-0 victory over Singapore.

That means the semi-finals to be played on 18 May are:

Here are the results from the six medal finals today:

Fresh off his Thomas Cup heroics Singapore’s badminton world champ is here in Hanoi and enjoying some Vietnamese food.

Badminton teams starts tomorrow and the singles on Thursday 19 May.

Joy for East Timor as they join the medallion party, they were the only nation without a podium place and now thanks to Felisberto de Deus they’re on the board.

7pm: Aleah Finnegan: “I’m just so grateful and blessed to be here”

“I’ve just been overwhelmed by the love and support I’ve been receiving and I just couldn’t ask for a better start.

Asked if she’s happy with her performance she said “ya, for the most part, glad I was able to do what I needed to do on the vault.

“Obviously I had a few little hiccups on bars but there’s nothing I can do about it now, I can’t change the past so we just turn the page and focus on tomorrow.

“Tomorrow I have beam finals so only one more but locked in and ready to go.”

“Of course I’m really happy and grateful,” Yulo said after his third gold medal win in two days, “but the competition isn’t over until tomorrow so I’m going to do my best and give my all in my performance.

“I can’t relax, I can be happy but I can’t relax and I’ve got to focus more for tomorrow’s performance.”

Asked about his pommel slip he said “why regret, I cannot do anything about it so why regret, I gave it all so I’m really happy.”

He did it in dramatic fashion too coming from two shots down to card a four-under 68 and end up with a seven-under 209, equal to Indonesia’s Amadeus Christian Susanto.

That meant a three-hole playoff was necessary and Chang emerged victorious with a calmly-slotted birdie on the third and final hole.

Yulo struggled on the pommel and finishes sixth of eight competitors with a 11.733 score.

Indonesia strikes gold in the women’s individual mountain bike downhill thanks to Tiara Prastika Andini in a winning time of 3:31:53.1.

The Philippines are celebrating more gymnastics gold with Carlos Yulo winning the men’s floor exercise and Aleah Finnegan the vault.

Finnegan, the former Team USA gymnast, is representing the Philippines for the first time here in Hanoi, and helped them to team gold yesterday.

Today a 13.133 score took her to vault gold ahead of local hope Thi Quynh Nhu Nguyen and Indonesia’s Rifda Irfanaluthfi.

Yulo took the men’s floor gold with a supremely confident routine, sticking his landings and looking every bit the world champion.

There’s more to come and you can watch it on this live stream:

Results claxon! The men’s MTB downhill is done and here are you winners:

What is sepak takraw you say?

Imagine freestyle tekkers with a small rattan ball mixed with the most spectacular martial arts performance you’ve ever seen all over a badminton net and you’re some way there.

There are competitions in regu, team, doubles, and team of four.

In the regu Thailand’s men look good winning their two matches 3-0 over Vietnam and Malaysia, and the Thai women have also won their two games looking strong.

The Thai’s are having a good day, they’ve just taken the women’s tennis competition defeating Vietnam 2-0 in the final.

Bronze is shared between the Philippines and Indonesia.

Natthakritta Vongtaveelap is a worthy gold medal champ, finishing on 14 under, seven shots ahead of Indonesia’s Aloysa Mabutas Margiela Atienza in the silver medal position.

Atienza was on the charge today shooting a seven under par to claim second place.

The fireworks at the SEA Games 2021 Opening Ceremony weren’t the only thing in the air as Ngoc Tien took the opportunity to propose to his girlfriend Bao Ly at the My Dinh National Stadium on 12 May.

Encouraged by his friends to do it, Tien took a knee in front of thousands of fans and asked his girlfriend of five years to marry him.

“She absolutely agreed,” he said according to local media, “t is really amazing and great happiness for us, I spent time before the ceremony looking for rings and was lucky to find the right one.

“It fit her finger perfectly and when I was leaving the jewellery store it stopped raining and that was lucky sign for me.”

Waves of congratulations are still rolling in for the couple on social media.

Vongtaveelap finished a massive ten under par yesterday and has extended her lead at the top of the leaderboard today, she’s four under with just six holes to go, now on -14, a massive 10 shots ahead of her nearest rival.

Indonesia’s Aloysa Mabutas Margiela Atienza is surging up the charts today, she’s on four under for the day and four under overall too.

Thailand have three golfers in the top three spots close to halfway through the final round.

Arsit Areephun is seven under par and in pole position for gold, while his Thai teammate Weerawish Narkprachar is now -6 and Ratchanon Chantananuwat is making a medal charge shooting three under so far today taking him to -5 overall.

Malaysia’s Ervin Chang is still very much in the hunt tied for third on five under too.

11:15am – Women’s Natthakritta Vongtaveelap takes big lead into final round

Vongtaveelap finished a massive ten under par on Saturday and took that clear lead into Sunday’s final round.

Her teammate Elila Galitsky was three under before today’s action with Malaysia’s Jeneath Wong just one shot behind her.

After yesterday’s Round 2 Thailand’s Arsit Areephun was out in front at six under par at the Dam Vac Golf Course in Vinh Phuc province.

Another Thai golfer Weerawish Narkprachar was four under along with Malaysia’s Ervin Chang.

Indonesia’s Amadeus Christian Susanto and Vietnam’s Nguyen Anh Minh both carded a three under on 14 May.

With Schooling currently serving his mandatory two-year military service, he may not take part in all the events we usually see him in.

10am – Schooling disqualified with Singapore from men’s 4×100 relay

Singapore came first in the 4×100 men’s freestyle relay event yesterday with Schooling in the pool, but they were later disqualified because of a false start.

The Singaporean quartet were in the middle of post-race interviews when they found out.

Malaysia and the Philippines were also disqualified, leaving Vietnam (3:21.810) to take the gold, with Indonesia (3:24.090) and Thailand (3:24.280) completing the podium according to the official results.

Schooling wasn’t in the pool this morning at the 50m butterfly, one of the events he usually takes part in, but two Singaporeans topped the event in his stead.

Top three in the men’s heat were:

Another jam-packed day of world-class sport awaits today, here are the medal finals up on day three:

On Day 1 Yulo won the men’s all-around individual and Finnegan had an emotional win yesterday competing in Filipino colours for the first time.

Good morning and welcome to Day 3 of SEA Games fun in Hanoi, stay with us for all the latest news, interviews, results and live updates.

Mon May 16 , 2022
SOUTH WILLIAMSPORT, PA – AUGUST 25: Baseballs sit on the ledge during the South Korea and Japan game during the International Championship game of the Little League World Series at Lamade Stadium on August 25, 2018 in South Williamsport, Pennsylvania. (Photo by Rob Carr/Getty Images) A troubling video of some […] 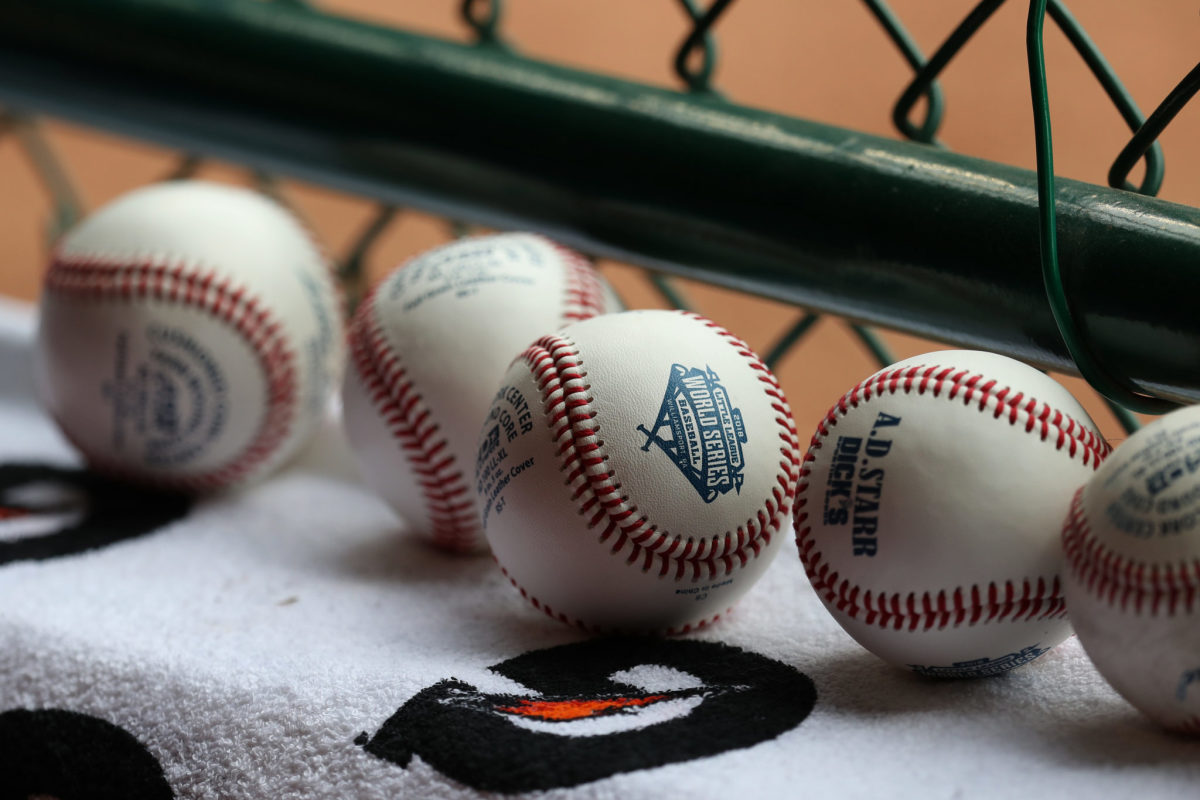