Donald Trump and the Saudi Arabian government are a match made in money heaven. Their cozy relationship is on display this week as the Saudi-backed LIV Golf Invitational will take place at Trump National Golf Course in Bedminster, NJ and the former President is taking part in Thursday’s pro-am. LIV […]

Donald Trump and the Saudi Arabian government are a match made in money heaven. Their cozy relationship is on display this week as the Saudi-backed LIV Golf Invitational will take place at Trump National Golf Course in Bedminster, NJ and the former President is taking part in Thursday’s pro-am.

LIV Golf and this week’s event have come under strong criticism from the families of 9/11 victims who are appalled by those cozying up to the enterprise which is financially backed by the same entity that played a role in bankrolling the September 11th attacks.

Trump was asked about how he felt hosting LIV Golf at his course this week and, ever the astute speaker, he launched into a wild diatribe about how no one has “gotten to the bottom of 9/11.”

“Nobody’s gotten to the bottom of 9/11, unfortunately,” Trump told ESPN Thursday. “They should have, as to the maniacs that did that horrible thing, to our city, to our country, to the world. So nobody’s really been there. But I can tell you that there are a lot of really great people that are out here today. And we’re gonna have a lot of fun and we’re going to celebrate.”

As anyone with a working brain knows, The 9/11 Commission Report “identifies Saudi Arabia as the primary source of al-Qaeda funding” and 15 of the 19 hijackers on September 11 were Saudi citizens.

“The evidence, Mr. Trump, is more clear than ever. The Saudi nation is largely responsible for the death of our loved ones and for this horrific attack on America. And you know it,” 9/11 Justice wrote in a letter to Trump this month.

Trump’s comments certainly caught the attention of the sports world, who had plenty of say about the former president’s word salad.

I know I could do this a hundred times about a hundred different things but just imagine the reaction if Obama said this. https://t.co/CxczCSodYd

Have to say this the first time I’ve heard the “nobody got to the bottom of 9/11” line used as a *pro*-Saudi argument https://t.co/bp4wBtFVBY

Does he think the hijackers came from Sausalito and not Saudi Arabia? https://t.co/jRxZlWndRI

“nobody’s gotten to the bottom of 9/11, unfortunately — donald trump, on golf” sounds like a clickhole bit https://t.co/EGYN0FdlxN

While sharing a slush fund with Jared and the prince… sports washing, grifting and extremism in full display at LIV

This, from the same guy who bragged about his tall building on the morning of 9/11/01?

(I’m technically sticking to sports here so you can’t get mad at me) https://t.co/kUNZTSPzOn

Fri Jul 29 , 2022
Jacob Daniels and Robin Isaacs were at the entrance to Chesapeake High School Thursday evening collecting sports equipment for the newly-established Peake Sports Closet. Plans are being made to have another collection night at Meet the Peake on Aug. 11. (Photo by Tim Gearhart) By TIM GEARHARTFor The Ironton Tribune […] 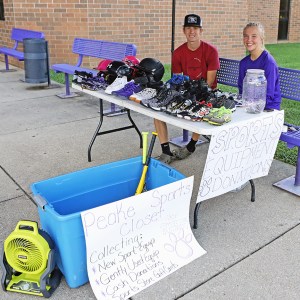