Heavyweight champion Muhammad Ali stands over fallen challenger Sonny Liston, shouting and gesturing shortly after dropping Liston with a short hard right to the jaw on May 25, 1965, in Lewiston, Maine. John Rooney/AP file photo It was a great fight . . . Why so? Well, because it gave […] 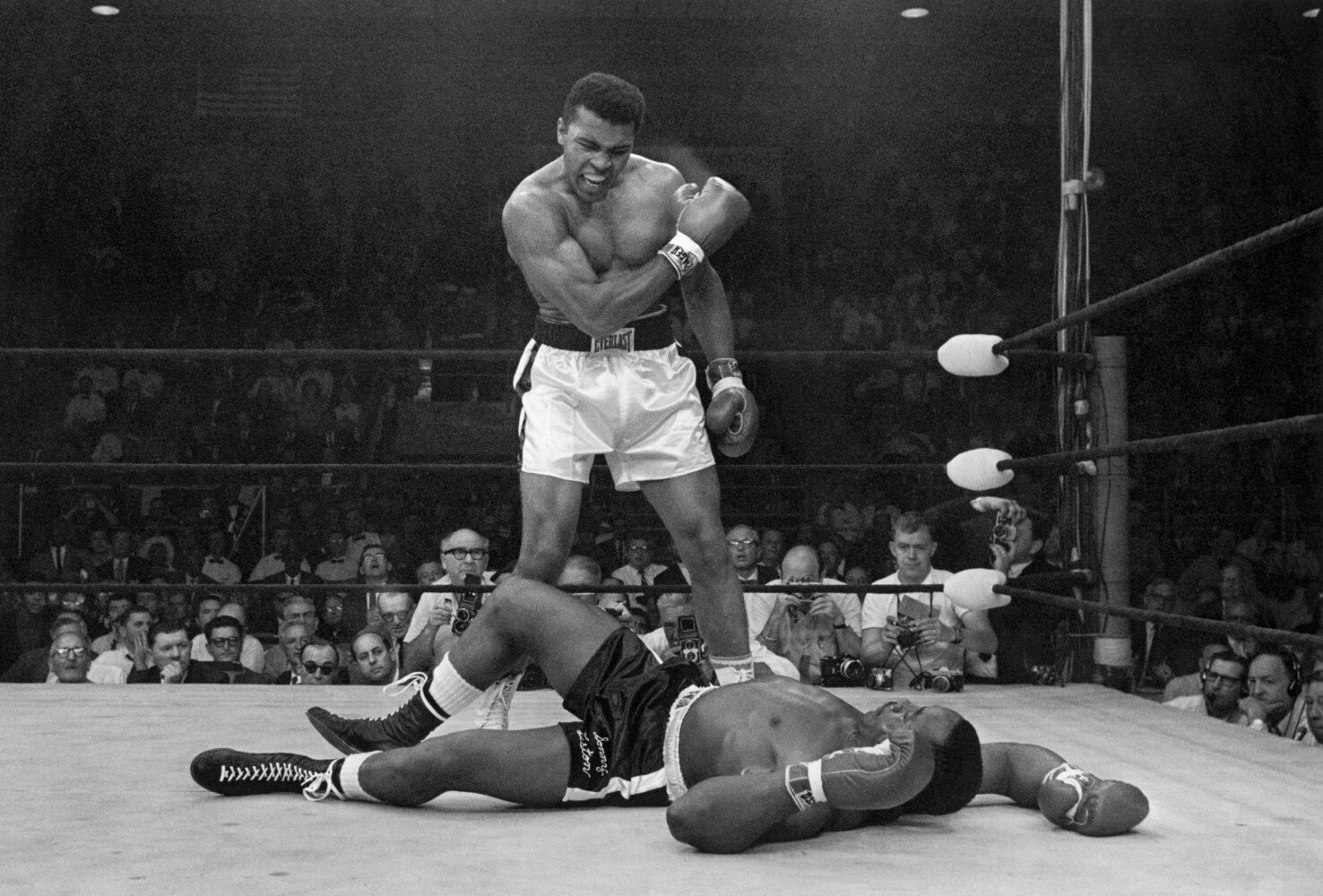 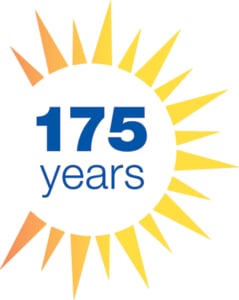 Well, because it gave food for argument for years to come, for one thing.

It was the quickest kayo in a heavyweight championship fight ever, that one minute which the Maine Boxing Commission gave forth as the official time, being 29 seconds shorter than when Tommy Burns kayoed Bill Squires in Colma, Calif., back in 1907.

The end coming so early in the opening round made it clear that charges of “fix” were without merit.

But it is a long way back to Denver and Sonny Liston has had has chance to make up for the Miami affair and lost to a mitster who, whether you like his Muslim connections or not, has demonstrated that he doesn’t get too far out on the limb when he shouts, “I’m the greatest.”

Liston maintained after the session that he was hit on the left cheek bone. Whether it was the right landing there on the cheek bone or on the adam’s apple as many, according to where they sat, thought the blow struck, Liston hit the canvas solidly, looking for all the world like a kayo victim.

The time keeper for knockdowns, Francis McDonough of Portland, started tolling off the count but without enough volume to make it clear above the pandemonium which broke loose as Liston was floored. 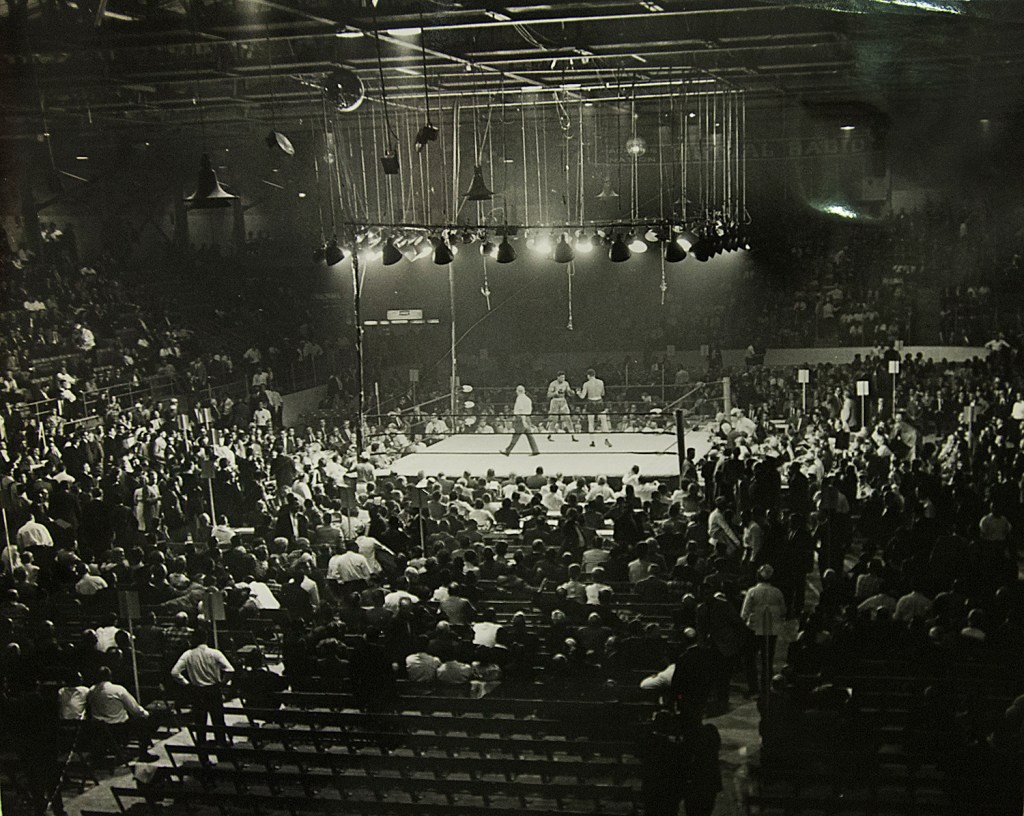 Two fighters in a preliminary match before the 1965 Muhammad Ali-Sonny List fight at Central Maine Youth Center in Lewiston in 1965. Associated Press photo

The champion was dancing around like a wild man, trying to get into a position to hear the fallen foe, as is now allowed.

Referee Joe Walcott tried to steer Clay away from his victim and that important procedure left the timing entirely to up to the Portland official.

This resulted in the count having passed “ten” and moved to “twelve” by the time he got the word from the timer.

During this time, and the period when Walcott was very much out of action, clearly stunned by what had taken place, Liston had started to get up only to collapse again.

Before Walcott got back to that side of the ring, Liston had climbed up still clearly very groggy and Clay was already renewing the attack.

Walcott stepped in and broke up the action, announcing Clay the KO winner.

With that, cries of “fake,” and booes, rang forth as those with an ax of one kind or another out for Clay let loose.

For some time it was a Roman holiday in the ring with no one able to make himself heard, as Liston looked very depressed and unhappy while Clay bounced and bounded around like a row boat on a rough sea.

The public address system failed to carry across his post-war message to the bulk of the fans but they knew he was talking and displayed their adverse feelings.

After the very long drawn out introduction of gentlemen of prominence and the singing of the National Anthem by Robert Goulet, the opponents met in the center of the ring, got their orders returned to their corners and at the bell came forth to do battle.

Clay struck first with a right and a left to Liston’s head. Neither blow was of a damaging variety. Then the champ danced away and around with Liston moving after him, stalking the younger man unsuccessfully — for Clay had no intention of being trapped. 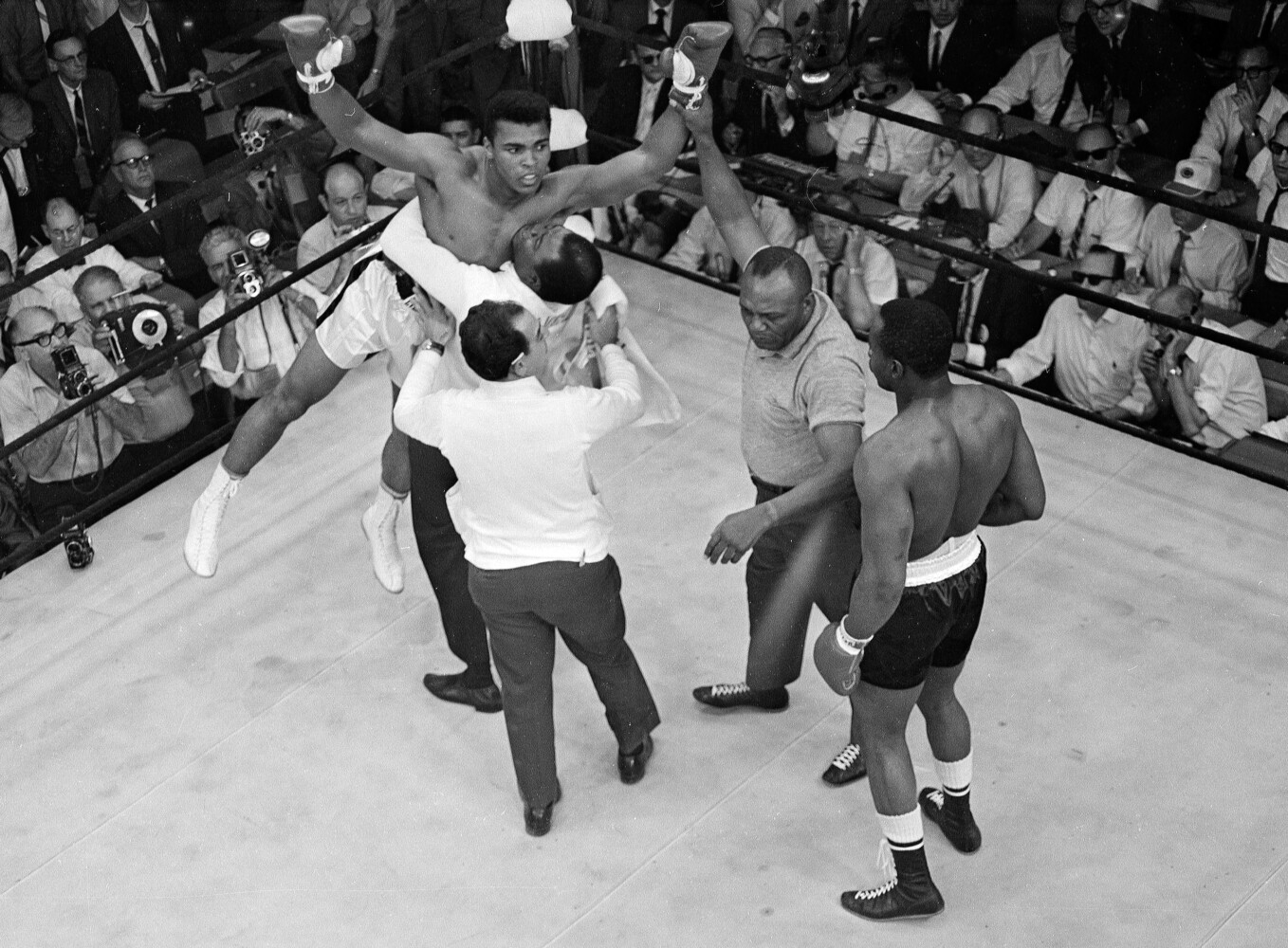 Heavyweight champion Muhammad Ali is lifted by happy handlers as referee Joe Walcott steps between them and challenger Sonny Liston after Liston was knocked out in the first round of their title fight in Lewiston, Maine, on May 25, 1965. The bout produced one of the strangest finishes in boxing history as well as one of sports’ most iconic moments. Associated Press file photo

They tried jabs only to find their deliveries short.

Clay circled to his left and shot in a few jabs. Liston was short with two jabs and then landed a grazing blow to the head with his left while Clay with his hands down, kept moving.

Clay scored with a short left, followed by a right to the head. Liston answered back with a solid right into the ribs.

As Clay circled he found Liston having him partially boxed in a corner.

Then as Liston moved in, Clay swung a looping, solid right which Liston claims hit him on the right cheek — and who should know better than Liston?

Down went Sonny and as he was stretched out and unmoving everything broke loose. The noise was bewildering and deafening so that it was impossible to hear what was going on.

Liston started to get up, finally, collapsed, and then on a second try came off his back and made it — too late to get a chance to redeem himself and not to prevent him from catching some of the delivery Clay threw at him before Referee Joe Walcott could get the message across that it was all over but the shouting and that Clay had retained his championship.

After the fight, Liston maintained that he didn’t think the count had beaten him — that he could have got up before ten, and so forth, and so on.

However, from where we sat that was just a figment of his imagination. 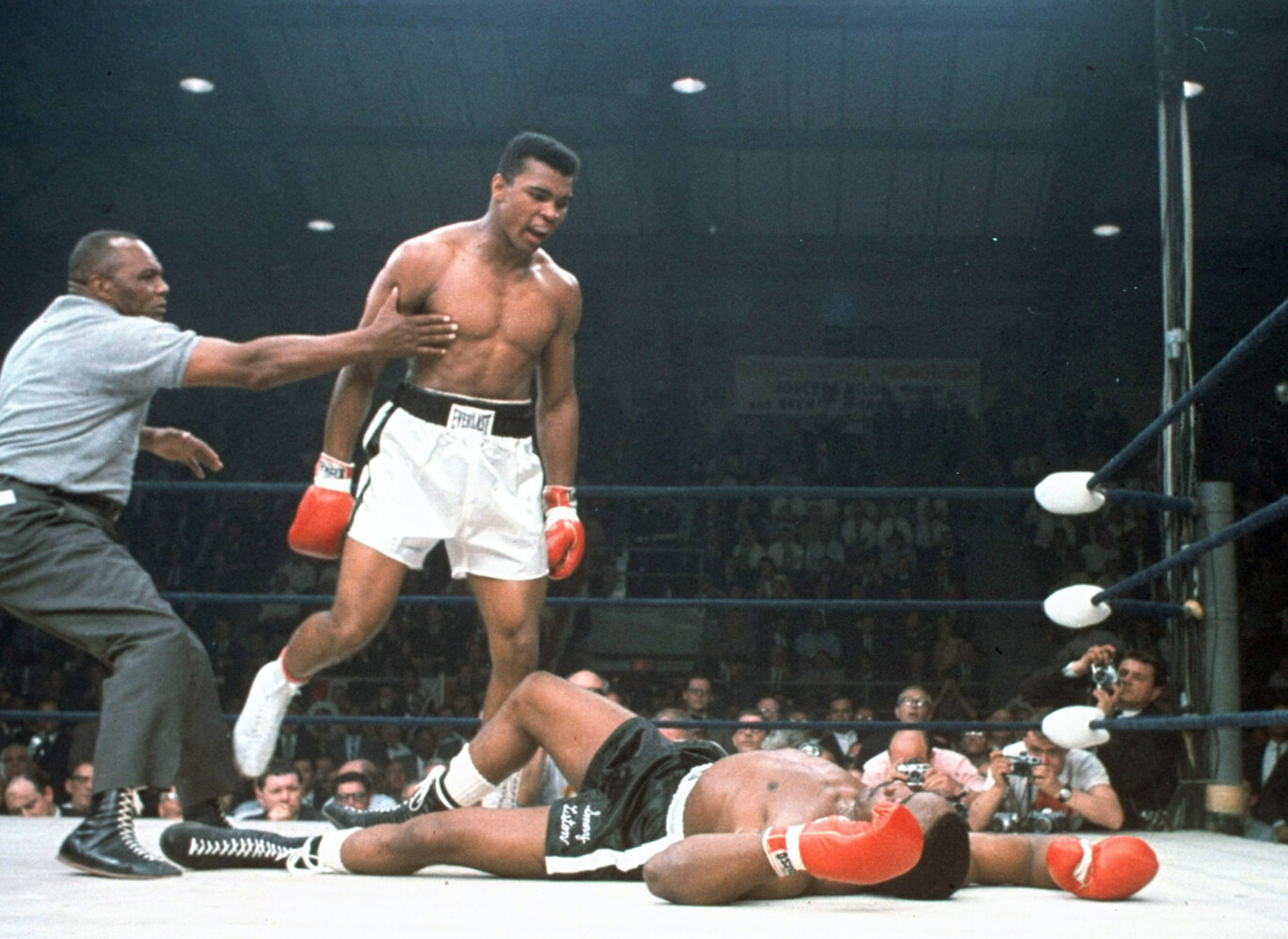 Heavyweight champion Muhammad Ali is held back by referee Joe Walcott, left, after Ali knocked out challenger Sonny Liston in the first round of their title fight in Lewiston, Maine, on May 25, 1965. Associated Press file photo

The punch which furnished the finishing touch was called by Clay an  “Anchor Punch,” and as he had done at Chicopee while in training — he credited StepIn Fetchit with having revealed it to him.

It was sort of a delivery from the grave, for Fetchi insisted that he learned it from one of the greatest, one-time world’s heavyweight champions Jack Johnson, who was killed in an auto accident on June 10th, 1946, at Raleigh, North Carolina.

The main event wasn’t the only bout on the card that went short of the possible distance either. All of the preliminary bouts were listed as six rounders — but all of them didn’t last that long.

Short article that appeared in the Lewiston Evening Journal on May 26, 1965, the day after the boxing match between Muhammad Ali and Sonny Liston in Lewiston.

Rudolph Clay, brother of the titlist — who also prefers an alias to the name that he was born with — posted a kayo win over Buster Redd, a fellow Louisville scrapper, in 0:58 of the second round — and the lower wound up with a concussion that resulted in an ambulance ride to a local hospital for further attention. The winner of that one weighed in at 184 ½, ten pounds over Redd.

Amos (Big Train) Lincoln of Los Angeles, who was one of Liston’s sparring partners during the pre-fight training at Poland Spring, looked like a potential title contender himself as he cooled Abe Davis in 0.35 of the first round. Lincoln worked fast — but in that brief glimpse looked like a real world beater.

Jimmy Ellis, 176, of Louisville, came out fast, and had had his opponent down twice before Referee Ken McDowell ruled Ellis a TKO winner at 1:04 of the opening round. The loser was Joe Blackwood, 175, of Long Island City.

Joe Beaulieu of Lewiston shared refereeing duties for the preliminaries with McDowell.

Editor’s note: This story, originally published in the Lewiston Evening Journal on May 26, 1965, was edited to correct a few misspellings.

Please check your email to confirm and complete your registration.

Use the form below to reset your password. When you’ve submitted your account email, we will send an email with a reset code.

Sun May 22 , 2022
iStock The products featured in this article have been independently reviewed. When you buy something through the retail links on this page, we may earn commission at no cost to you, the reader. The Sports Illustrated editorial team is not involved in the creation of this content. Learn more here. […] 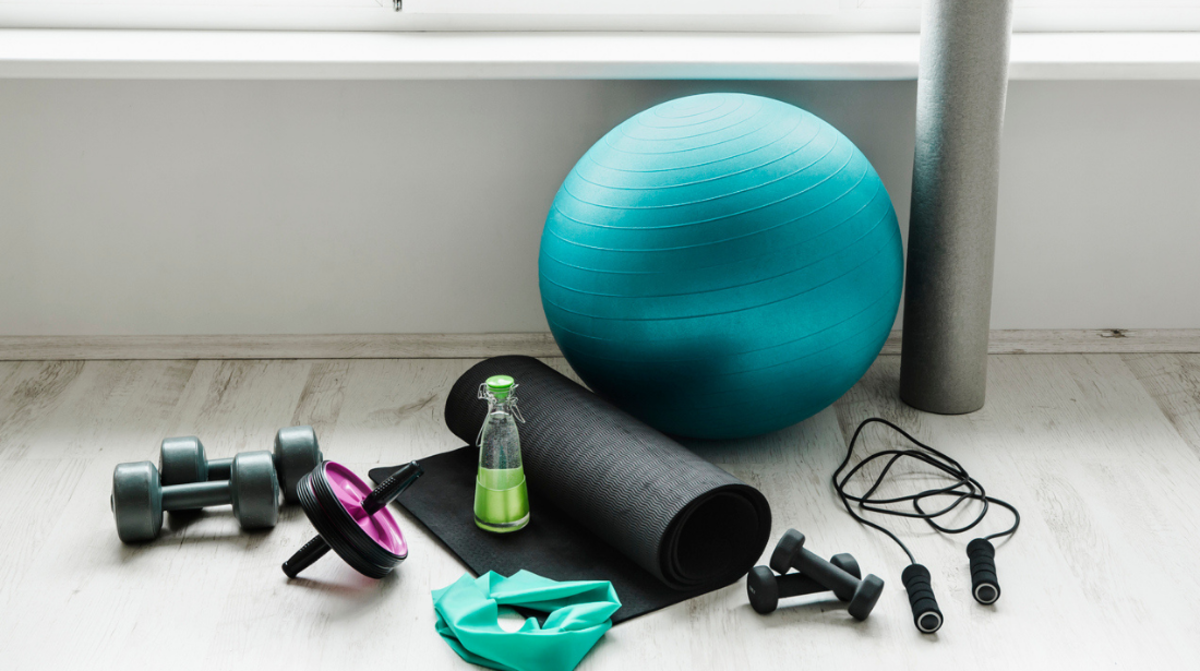