The U.S. Olympic and Paralympic Committee supports the IOC and other Olympic sports organizations looking for ways for Russian and Belarusian athletes to return, as neutral athletes, to competition in Olympic sports. USOPC board chair Susanne Lyons said the USOPC was part of a unanimous endorsement of the idea from leading Olympic […]

The U.S. Olympic and Paralympic Committee supports the IOC and other Olympic sports organizations looking for ways for Russian and Belarusian athletes to return, as neutral athletes, to competition in Olympic sports.

USOPC board chair Susanne Lyons said the USOPC was part of a unanimous endorsement of the idea from leading Olympic sports officials who attended a summit at the IOC headquarters of Lausanne, Switzerland, last week.

The USOPC is not yet saying that Russia and Belarus athletes should be allowed to compete at the 2024 Paris Games, or any other international sports competition, in a neutral capacity.

“We did not agree that the athletes would come back,” Lyons, who attended the summit, said Monday, echoing her comments from September. “We agreed that there would now be an exploration and a consultation with stakeholders to see whether there could be a pathway for those individual athletes to come back as neutrals.”

Lyons said that there was “absolute agreement” that, should Russia and Belarus athletes be reinstated, there would be “a stricter neutrality” than occurred at past competitions when Russian athletes competed independently due to the nation’s doping sanctions. In those cases, Russians competed without their national flag and anthem but sometimes with the national colors as “Olympic Athletes from Russia” or “Russian Olympic Committee” athletes.

One of the outstanding matters is how Russian athletes could be reintroduced into Olympic qualifying events, which are under way. At last week’s summit, the Olympic Council of Asia president offered to allow Russia and Belarus athletes into competitions on its continent. The IOC plans to explore that possibility.

In February of this year, the IOC called on sport federations to bar Russian and Belarusian athletes from participation in international competition in light of the invasion of Ukraine. But IOC President Thomas Bach has said since at least September that Russian athletes who do not endorse the war could be accepted back into international sports and has drawn a distinction between IOC sanctions against Russia and Belarus and its recommendation that international federations exclude athletes.

“I don’t know how they could possibly really know whether an athlete is or is not supportive of their government actions, but there was at least an agreement [at the summit] that they would want to have athletes who had not actively supported the conflict,” Lyons said. “This is going to be impossible to figure out how they would monitor it.”

“The participation in sport competitions was not based anymore on sports merits, but on purely political decisions,” Bach said. “So we had to act against our own values and our own mission, which is to unify the entire world in peaceful competition. We had, in fact, to protect this intricate integrity of the competitions.

“What we never did, and we never wanted to do is prohibiting athletes from participating in sports only because of their passport.”

Lyons said that one of the initial agreements of the summit was to support Ukraine and its athletes.

“I’m sympathetic with the plight of the Ukrainian people who, by no fault of their own, have this travesty inflicted upon them,” she said. “That said, I think the conversation [about Russia and Belarus athletes] was really more at a conceptual level about what is, first of all, our role as a movement. We have always said that our role is to try to engender peace and unity in sport.”

The Associated Press contributed to this report.

Thu Dec 15 , 2022
DOHA, Qatar — There is perhaps no one in the world who has paid closer attention to the diction and pronunciation of the former England soccer captain John Terry over the past month than Lassaad Tounakti, a 52-year-old Tunisian with a gift for languages, a passion for cologne and an […] 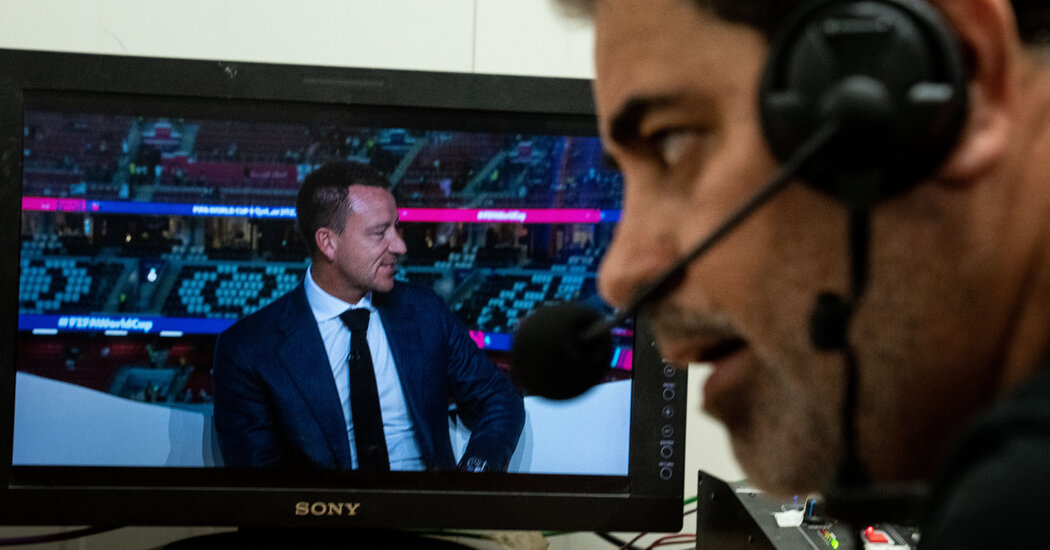